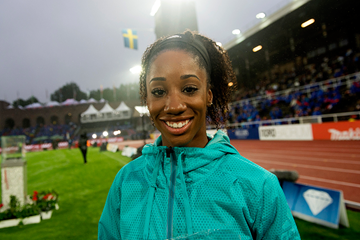 Kendra Harrison of the United States splashed through the rain at the Bauhaus-Galan in Stockholm on Thursday evening (16) to take her third successive IAAF Diamond League victory in the 100m hurdles.

However, it was the return of Swedish hurdling heroine Susanna Kallur, who finished fifth in 13.00 in what was her first 100m hurdles race in six years, who stole the hearts of the home crowd.

With a rain-sodden track, Harrison was never likely to repeat her 12.24-second clocking from Eugene last month, but the 23-year-old once again asserted her dominance over her rivals with another crisp display of hurdling, taking a cosy victory in 12.66 ahead of world indoor champion Nia Ali (12.85) and Queen Harrison (12.87).

“Conditions slowed me down a little but I’m happy with my performance,” said Harrison, who will now turn her attention to next month’s US Olympic Trials in Eugene. “The US team is one of the toughest to qualify for but I am in good form and will give it my best shot.”

Belarus’s Alina Talay was fourth in 12.90, but all eyes in the Olympic Stadium were fixed on Kallur as she crossed the line fifth in 13.00. It was a run which put six years of injury heartbreak behind her and launched the 35-year-old into the reckoning for Olympic qualification.

“It feels like I have been running a very long marathon for the past few years and this was just the last hundredth of a second and the absolute best part,” said an emotional Kallur afterwards. “I’ve been doing so much work to be able to come here and finally I have got a little bit of a reward.”

Kallur needs to run 12.80 to be selected for the Olympics by the Swedish federation, and she may yet take part in next month’s European Championships in Amsterdam. “I will have to wait and see how my body feels tomorrow and the day after that and the week after that,” she said.

In her first outing of the season over 200m, British record-holder Dina Asher-Smith confirmed her Olympic medal potential with a comfortable win in 22.72 (-0.8m/s). The 20-year-old came home a metre clear of Jamaica’s Simone Facey, who ran 22.81.

“It was okay,” said Asher-Smith. “In these conditions and for my first outing of the year, I can’t complain.”

Fellow Briton Desiree Henry had a breakthrough back in third, lowering her PB to 22.88. The 20-year-old 2011 world youth champion looks capable of going much faster in the coming weeks if she races in less inclement weather.

In the men’s 400m hurdles, Javier Culson of Puerto Rico claimed his first win of the year in the IAAF Diamond League, though his task was made considerably easier by the disqualification of USA’s Bershawn Jackson for a false start and the mid-race withdrawal of Diamond Race leader Michael Tinsley.

Nonetheless, Culson looked in control from the outset, and turned into the home straight with a two-metre lead over South Africa’s LJ van Zyl, which he extended all the way to the finish to win in 49.43. Kerron Clement came through strongly for second in 49.87 ahead of Poland’s Patryk Dobek (49.89), with van Zyl winding up fourth in 50.21.

“It’s not nice conditions but this is sport,” said Culson. “It’s a little warmer in Puerto Rico.”

Another athlete who didn’t look at home in the cool conditions – but managed to emerge victorious – was Jamaica’s Novlene Williams-Mills, who fended off a home-straight challenge from Britain’s Anyika Onuora to take victory in the women’s 400m in 52.29.