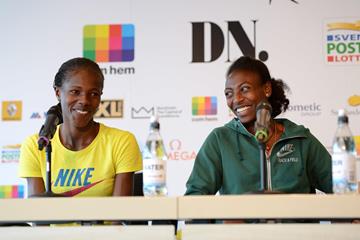 Sweden’s world 1500m champion Abeba Aregawi and her Kenyan 800m counterpart Eunice Sum sat alongside each other at the DN Galan meeting hotel the day before the IAAF Diamond League competition and the inevitable question was asked of them ahead of their forthcoming 800m race: “Who is going to win?”

Sum looked at Aregawi; Aregawi looked at Sum. Both looked slightly embarrassed, and no answer was forthcoming.

What is clear is that whoever wants to win a race which will also include USA’s Moscow bronze medallist Brenda Martinez and fellow American Alysia Montano, whose bold front-running narrowly failed to earn her a medal on Sunday, will have to run fast.

After setting a personal best of 1:57.38 in getting her gold medal, Sum has arrived in Stockholm with even greater ambitions in terms of time.

“I think I know we are going to run maybe even faster than in Moscow,” Sum said. “I am ready. Maybe I am going to try for a new personal best.”

Aregawi, who emerged as a top class runner by winning the Ethiopian 800m championships but who has since picked up European Indoor and world titles over 1500m for her adopted country, reflected on her recent Moscow success: “It was a great feeling to win a gold for Sweden in Moscow. I was very happy, but also it was a great relief when I crossed the line.”

On the subject of which event best suited her, she replied: “I analysed my competitions and decided that to get to world class I should concentrate on the 1500.”

Martinez will be hoping to have made a swift recovery from the migraine which prevented her appearing at the pre-meeting press conference.

She sent a message of apology in which she added that she was “hoping to be 100 per cent” the next day.

Sum confirmed that she had never doubted she would catch up with Montano in Moscow. “I was not really worried,” she said. “I stayed two metres behind and I enjoyed the race. It was very nice. When I crossed the line for the first 400m and saw it said 56 seconds, I said then I will try and run my personal best. It was my first medal ever and I was very excited.  I think I am in good shape and I enjoy running tomorrow.

“I changed my programme this season. At the beginning I was running at 1500m, but at the Kenyan trials a month ago I changed to the 800m because I had done a lot of speedwork," said Sum.

Kenya’s Asbel Kiprop, who will run over 1500m against a field which includes World 800m bronze medallist Ayanleh Souleiman of Djibouti, said he had: “a point to prove” this year after seeing his London 2012 ambitions ruined by a late hamstring injury.

“I felt great clinching my title for the second time,” Kiprop said.

“In 2012, a week before I was going to defend my Olympic title, I pulled my hamstring very badly and I didn’t make it to the final. So at the beginning of this season I had to prove a point to show I was still OK and it was only an injury last year.

“Running 3.27 in Monaco this year and winning in Moscow proves a point to my fans and people who had hopes in me during the Olympic Games, who were not happy when things went bad.

“But now it is a challenge coming from the World Championships and racing athletes who maybe did not get there and have some disappointment and who now want to beat us, runners like Augustine Choge of my country. It is really challenging to come and race them. It is a lot of pressure, harder than when I was not a World champion. Every eye will be on me and people want to beat me now.”

Souleiman admitted that winning an 800m medal in Moscow for Djibouti had come as a “surprise”. The former footballer had only run two major 800m races in his life before Moscow. He suffered an unhappy time in his favoured event of the 1500m in a semi-final which became congested and confused before the final lap.

“There were some people pushing and fighting,” said Souleiman. “It was very bad. These were my first World Championships.”

Like Kiprop, 110m hurdler David Oliver started the year with something to prove.

“I felt like this was the make or break year,” said the man who took gold in the Luzhniki Stadium in 13.00, the fastest time of the year.

“I couldn’t go three years in a row not performing to my best. After the first round in the 2011 US trials I got an injury, and it was downhill from that point on. If you are not performing you don’t get to sit up here and do these interviews, come to the meets. I knew I needed to change.

“I only train four days a week now. I don’t lift weights in the traditional sense any more, I don’t do indoor meetings. Things started out very slow. I was running 13.30, even in at the Shanghai Diamond League, but when I got to watch that race back I was able to see one thing I was doing wrong , it was something I was doing with my hips. Within a couple of days I made a big improvement.”

Oliver added that he was now six or seven pounds lighter. “I just kept getting injured. Being tight muscle-wise had to be part of the reason for getting injured over the last 18 months; and being 30, you can’t do stuff you were doing when you were 24, 25.”

So winning in Moscow, when he broke down with emotion after the finish line, was a huge accomplishment.

“It meant the world,” reflected Oliver. “You just think about all the sacrifices and all the downs you went through. The emotions came out as soon as I crossed the line, and I am not a particularly emotional type of guy.

Tomorrow, of course, I want to go out there and try to get a win. I’ve been in Stockholm three previous times, and I’ve been second on each occasion!”

World Shot Put champion Valerie Adams also has victory in mind in the Olympic stadium, where she wants to beat the meeting’s best ever mark of 20.26m, set by her last year.

“Tomorrow I want to break the stadium record again and I’m in shape to do it,” she said. “I went into Moscow unbeaten in 38 competitions so there was so much pressure on me. I enjoyed the moment on the podium that I didn’t have in London, even though the stadium was nearly empty it was great to stand there knowing how hard I had worked and to put my little old country of New Zealand on the map again among all the huge nations, because we are a country of only four million people.

“Winning gold in Moscow was the foremost goal for me, and I was happy to throw 20.88. Now I have three more competitions, and I will be trying to surpass 21 metres. I’m in shape to do it. Now that I am a bit more relaxed, maybe I will be able to do it,” commented Adams.

Russia’s World Long Jump champion, Aleksandr Menkov, admitted he was a little tired after his gold medal efforts on home soil, but added that he would be planning to do his best against a field which also includes Sweden’s Michel Torneus, who finished two centimetres behind him at the European Athletics Indoor Championships where the latter took the silver medal.

“Tomorrow, we will fight between us and see what is going on,” said Menkov. “I am happy to come to Sweden. It always has a positive atmosphere and the spectators are very good and friendly.”

For Torneus, born and raised in Stockholm, this will be the first time he has competed at the DN Galan meeting, an event he has watched since he was a six-year-old and at which he has collected autographs in the past, including that of the multiple Olympic and World champion Carl Lewis.

“I am just excited to jump in my home town in front of friends and family,” said Torneus. ”This meeting is part of our history important thing to hold onto. This is my first time to compete in this. I have been waiting a long time to compete in this and finally it has happened. I am jumping against the best in the world so it is inspiring for me.”

Ethiopia’s Meseret Defar admitted that she would rather have been running 5000 than 3000m here, but added that she would be doing her best in what looked like being a very competitive race.

“There is not only Genzebe Dibaba, but also 1500m bronze medallist Hellen Obiri and 5000m silver medallist Mercy Cherono, so it is not an easy race tomorrow. It will be very strong, but I will try.”

Svetlana Shkolina, World High Jump champion, will be involved in one of the most competitive events at the meeting as she faces the London 2012 Olympic Games champion, her fellow Russian Anna Chicherova, and the American who took silver in both London and Moscow, and tops this year’s world lists with 2.04m, Brigetta Barrett.

“I managed a big effort to get the gold medal,” said Shkolina. “Of course it was my dream to become the world champion.”

Chicherova admitted that her failure to add world to Olympic gold in front of her home crowd had caused her to weep. “Of course I was sad, and it was like ‘I Can’t Get No Satisfaction’! I was crying; it was the truth.

“I’m sad because I waited this competition so much and I wanted to do as best as I can but it was just a poor psychological problem  because I was worried. At the crucial moment, when something inside me can be broken and I do mistake, and of course I did it.

“But when I ran around the stadium after the competition I understand that a  lot of people love High Jump and I can be proud when I saw it, how many people came to support. I am crying, and it is truth. But now I am OK.”