The 10th African Junior Championships continued on Friday (13) at the UB Stadium in Gaborone, Botswana, with another string of fine performances. The highlights of day two of the four-day meet were the men’s 1500m and 10,000m finals where Kenya grabbed a 1-2 in both events.

In the 10,000m race 18-year-old Geoffrey Kirui hit a jackpot with a world class result winning in a magnificent 27:55.74 crushing the old competition record by about 45 seconds. Nicholas Togom also set a personal best for second place in 28:23.22 and the silver medallist at the World Cross Country Championships junior race in Punta Umbría this year, Thomas Ayeko of Uganda, was third in 28:27.54 PB.

The 1500m was won by 17-year-old Hillary Maiyo also in a competition record and a personal best. Maiyo, who was disqualified in the heat of the 2010 World Junior Championships, was a player already last season when he set a 3:36.42 personal best in Milan, Italy in September. Geofrey Barusei was second in 3:35.54 PB and Ethiopians booked places three and four with Soresa Fida finishing in third in a 3:36.38 PB and Zebene Alemayehu fourth in a 3:37.49 PB.

In other events Sadam Koumi of Sudan won the men’s 400m with a 46.37 personal best before Nigerian Japhet Samuel, who won the silver in 46.45 PB. The 400m Hurdles was won by Abdelmalik Lahoulou in an Algerian junior record 51.69. 100m was run into a strong headwind and won by South African Gideon Trotter in 10.49. In the junior women’s 100m the winner was Nigerian Josephine Omaka in 11.97. Annett Negesa of Uganda won the 800m in a 2:04.94 season’s best and Magiso Manedo of Ethiopia clocked 52.09 personal best for the 400m win.

Note: Correction to day one - The women’s Discus Throw was not won by Charlene Engelbrecht of Namibia, she was second with 46.10m. The winner was Ischke Senekal of South Africa, who threw 49.90m personal best for the gold. 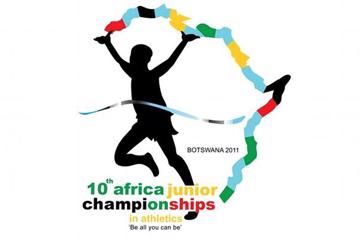