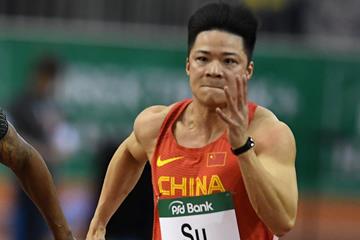 Su and Schippers among the sprint headliners in Dusseldorf

World Indoor Championships medallists Su Bingtian and Daphne Schippers will be among the headliners in their respective 60m races at the International PSD Bank Meeting Dusseldorf, the third stop of the World Athletics Indoor Tour, on 4 February.

Su set one of his three Asian indoor records of 2018 at this meeting, clocking 6.43. He lowered it 6.42 in Birmingham a month later, a performance that propelled him to world indoor silver and equal-fifth on the world all-time indoor list. The 30-year-old Chinese also won at this meeting last year, clocking 6.49. This will be an important meeting for Su who'll be among the star home names at the World Athletics Indoor Championships Nanjing 2020 less than six weeks later.

He'll take on Jan Volko from Slovakia, the reigning European indoor champion over the distance, and Julian Reus, the German indoor record holder at 6.52.

While she's best known for her 200m exploits, Schippers, 27, has pieced together a strong resumé over 60m indoors, with world indoor silver from 2016, European indoor gold from 2015 and continental indoor silver from 2019 in her collection. She was fifth at the World Indoor Championships two years ago and sports an impressive 7.00 career best set in 2016. She was third at this meeting last year.