Guadalajara, MexicoWorld and Olympic medallist Leonel Suarez became the first Cuban to win the Decathlon title and Canada’s Dylan Armstrong successfully renewed his dominance in the Shot Put, both with new records on Tuesday (25), the third day of the athletics tournament of the 16th Pan American Games.

Elsewhere on an entertaining programme of athletics, Lerone Clarke edged Kim Collins in the Games fastest 100m final ever to take Jamaica’s first gold in Guadalajara in any sport and regain the sprint title back to his country.

Cuban takes first ever Pan Am Decathlon title for his country

Trailing Jamaica’s 2007 World silver medallist and defending champion Maurice Smith until the Pole Vault, Suarez again showed his strong arm in the Javelin Throw, heaving the 800g implement to 72.19 metres for a comfortable 103-point lead going into the 1500m.

The Cuban sealed his win with a 10-second lead over Smith in the final event to tally a new Pan American Games record of 8373 point, erasing the Jamaican’s continental standard of 8278, set in Rio 2007.

“I am extremely happy as I became the first Cuban to win the Decathlon at the Pan American Games. I felt the pressure as Maurice is a great competitor and he was defending his title. The 1500m was the toughest event due to the high altitude, but it was important to break the record and leave our mark,” Suarez said.

“It has been a great year and I am sure my family, friends and my people are happy at home. I will now continue to work hard towards London,” he added.

Smith settled for second in a season’s best of 8214, ahead of Cuban Yordani Garcia, who tallied 8074 to take the bronze, one spot down from Rio.

One of the busiest men on the circuit this year, Daegu Shot Put runner-up Dylan Armstrong gave Canada its first athletics gold in great fashion, producing the first 21m toss in Games history (21.30 in the fifth round) to smash USA’s Reese Hoffa’s record of 20.95, set in 2003.

"A medal is a medal, and to get my community and country a medal, that means a lot, to help out the team and athletics," said Armstrong. "It's all positive."

Carlos Veliz improved one place from Rio to silver in a personal best of 20.76, while German Lauro moved from fifth to bronze this time in 20.41. Both the Cuban and the Argentinean were just two centimetres shy off their country’s national records.

Lerone Clarke lived up to Jamaica’s worldwide reputation in the sprints, taking the 100m final in a close race with St. Kitts and Nevis’ 2003 World champion and 2011 Daegu bronze medallist Kim Collins, who ran a Pan American Games record of 10.00 sec in the second semi-final on Monday (24).

The 30-year old blazed to the second fastest race in his career (10.01) to edge out Collins, who had to settle for second with 10.04. Trinidad and Tobago’s Emmanuel Callender held on for third in 10.16.

Clarke became only the third Jamaican to win the 100m in the 60-year history of the Games, following Donald Quarrie in 1971 and Michael Frater in 2003.

Santos had to be convinced

The women’s dash went to 21-year old Rosangela Santos, who improved her personal best twice in two days, this time to 11.22 to held off the challenge of USA’s Barbara Pierre (11.25) and Shakera Reece (11.26), who gave Barbados its first medal in Guadalajara.

“This has been a very special year after a two-year break and at some point I thought of quitting athletics. I did not wanted to come here because I was tired after a long season, but my coach convinced me I could run a good time here. I was not sure, but I found a lot of encouragement from (2008 Olympic Long Jump champion) Maurren Higa Maggi”, said Santos, who became the third Brazilian in history to take the Pan American 100m crown.

Munoz, coming back after maternity, regained the continental gold won eight years ago in Santo Domingo. She will double in the 1500m. Mexico’s Gabriela Medina (2:04.41), also a mother, and Colombia’s 2007 runner-up Rosibel Garcia (2:04.45) joined her on the podium.

Third in 2003, Castillo bounced back with an opening 8.05m – the only 8m leap of the day- to become only the second Venezuelan to win a Pan American athletics gold in history and the first one in 48 years.

Looking ahead to Day 4

The men’s 400m final will feature two men each from Cuba, the Bahamas and the Dominican Republic, including the Bahamas’ 2010 World Indoor and 2007 Pan Am defending champion Chris Brown, Cuba’s 2010 World Indoor silver medallist William Collazo and the Dominican Republic’s 2010 Youth Olympic champion Leguelin Santos, who ran a personal best of 45.41in the second semi-final at 17.

Colombia’s Yenifer Padilla was the fastest woman in their 400m semi-finals with 51.76. USA’s Yvette Christine Lewis ran 12.88 to lead the qualifiers to the 100m Hurdles final.

The programme also includes the first round of the 200m in both genders and the men’s 400m Hurdles semi-finals. 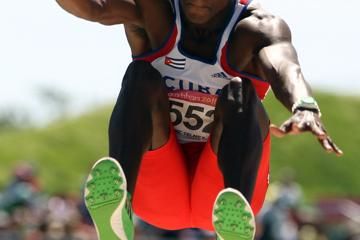