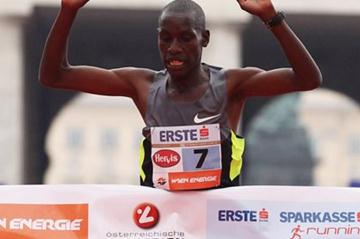 Defending champion and course record-holder Henry Sugut will return to the Vienna Marathon, an IAAF Gold Label Road Race, for its 30th edition on April 14, but the Kenyan will be up against some strong opponents.

Last year Sugut won in Vienna with 2:06:58, 40 seconds faster than the previous course record that was set by two-time World champion Abel Kirui in 2008. With his Austrian all-comers record, Sugut – who also won in Vienna in 2010 – became the first man since 1992 to repeat a victory at the Vienna Marathon.

But in this year’s race there will be two other men with faster PBs. Jafred Kipchumba hasn’t competed for more than a year, but his last race was the 2011 Eindhoven Marathon, which he won with a PB of 2:05:48 – 70 seconds quicker than Sugut’s best. Kipchumba is also familiar with the Vienna course, as the Austrian capital played host to his Marathon debut in 2009, when he finished sixth in 2:10:42.

Next month’s race will also give Gilbert Yegon a chance to get his revenge. The 24-year-old finished second to Sugut last year, exactly matching the former course record time of 2:07:38. His personal best, however, stands at 2:06:18, which he ran when winning the Amsterdam Marathon in 2009.

Sweden’s Mustafa Mohamed could be the top European finisher in Vienna this year. The Steeplechase specialist – who boasts a PB of 8:05.75 – turned to Marathon running last year. The 34-year-old ran 2:12:28 on his debut in Hamburg last April, then finished fourth at the Florence Marathon in November with 2:12:34.