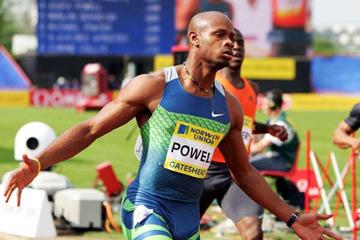 Gateshead, UKSurely, noone could have predicted this – not Asafa Powell, not the meeting’s organisers, and certainly not Justin Gatlin. World 100m records don’t get set in Britain, and definitely not in Gateshead.

But that’s what happened at the Norwich Union British Grand Prix this afternoon when Powell brought a glorious day’s athletics to an astonishing conclusion by equalling** the 100m record of 9.77 he set in Athens almost exactly a year ago and which Gatlin matched in Doha last month.

The two were scheduled to clash here for the first time since last summer until Gatlin – the World and Olympic champion – withdrew a few weeks ago claiming that a race against Powell wasn’t in his agreement. Rumours suggested he didn’t fancy such a tough challenge in the often chilly, wet, windy weather of north east England.

Maybe he’ll be relieved he didn’t make the trip, or maybe he’ll rue a missed opportunity, for Powell and the climate conspired to send an uncompromising message to the American.

“I made it look easy but that’s how I run”

With the temperatures in the high 20s and the wind gauge clicking over at a near-perfect +1.5m/s, the 23-year-old Jamaican was at his imperious best – first out of the blocks, first into his running, relaxed and pulling away from a world class field by half way, he crossed the line almost three tenths of a second ahead of his compatriot Michael Frater, the World Championship silver medallist.

“I told them I would do my best here and that was my best,” Powell said afterwards. “I made it look easy but that’s how I run.”

Asked if he had a message for Gatlin, Powell momentarily looked serious. “That’s how you run a world record,” he said. “I ran 9.77 last year so I knew I could do it again. How fast can I go this year? I don’t know, but I’m going to run really fast.”

There was even a hint that Powell had eased up in the last two strides, a mistake that surely cost him sole ownership of the record for the timekeepers measured his run at 9.7629. Gatlin’s run in Doha was timed at 9.7660. But that makes no difference at all, they continue to share the World record.

“I know my coach, and I know he’s not going to be happy,” said the Commonwealth Games champion. “At the end I didn’t do what he told me.”

Finishing in third, almost lost among all the excitement, was Britain’s Dwain Chambers who made a successful return to the track after nearly three years absence following a drugs suspension. Chambers finished just one hundredth behind Frater in 10.07, ahead of fellow-Brits Marlon Devonish and Mark Lewis-Francis, and quicker than any Briton ran all last season.

Chambers, the British and former European record holder, received a largely warm reception from the crowd. “I am happy people seem to want to give me a second chance,” he said. “I am grateful still to have an opportunity to compete in track and field. Today marks the beginning of a new era for Dwain Chambers.”

A flood of records in the good weather!

It was a new era for the stadium too as no fewer than six stadium records fell, including the men’s 3000m mark set by Brendan Foster on the day the stadium opened in 1974. There was also a British all-comers’ record in the men’s Shot Put, and a Kenyan record in the women’s 800m.

Foster’s record of 7:35.10 was a World record 32 years ago but his figures were finally eclipsed from the stadium record books by Eliud Kipchoge this afternoon. The Kenyan, who became the World 5000m champion in 2003, overhauled Isaac Songok in the closing stages to cross the line in 7:33.54 after a fast closing 200m.

The best competition of the day, however, was the Shot Put, won by Christian Cantwell with 22.45m on the very last throw after a tight tussle with his fellow American Reese Hoffa. Hoffa had led by a centimetre after round five and increased his lead by four centimetres with a 21.76 effort in the sixth.

But Cantwell produced a magnificent put to end the competition, the furthest throw in the world for at least two years. “This was a great competition,” said Cantwell. “I really had to pull that out on my last put. I think I can go over 23 metres and hope to do that in the US championships.”

The Kenyan women's 800m record, and another world leading mark, went to Commonwealth champion Janeth Jepkosgei who sped away from the field over the final 200m to clock 1:57.22. In doing so she pulled Britain’s Rebecca Lyne to a massive personal best of 1:58.20, the fourth quickest in the world this year.

It’s the first time the 23-year-old has broken the two minute barrier and a sign of Britain’s growing strength in female middle distance running. “I was pleased to run just over two minutes recently, but to run 1:58 is fantastic,” said Lyne. Two other Brits, Jenny Meadows in fifth and Marilyn Okoro in sixth also set PBs, marginally outside two minutes.

The other stadium records fell in the women’s sprints. USA’s Torri Edwards won the 100m in 11.06, beating Jamaica’s Commonwealth champion Sheri-Ann Brooks and removing the mark set by Merlene Ottey 20 years ago and equalled by Germany’s Katrin Krabbe in 1989. Ukraine’s Zhanna Block was second in 11.42, with Brooks third in 11.49.

Edwards had another good run in the 200m when she produced a season’s best of 22.50 for second. But the big surprise was the winner. USA’s Sanya Richards, better known as a 400m runner, clocked 22.25, a personal best by nearly three tenths and the third best in the world this year.

“I am really excited right now,” said Richards. “My coach believes that the stronger you get the faster you get, and I think he’s right. Everybody was worried about the weather here but it turned out to be just the best.”

It wasn’t the best day for the Olympic champion Veronica Campbell, however. The Jamaican pulled up with 80m to go clutching a hamstring and had to be carried from the track.

Richards heads the world over 400m this year with 49.82 but the world and Olympic champion, Tonique Williams, took advantage of the American’s absence to set down a marker. The Bahamian ran a season’s best of 50.13, second only this year to Richards’ 49.82. Jamaica’s Sherricka Williams was second in a personal best of 50.24.

Tirunesh Dibaba was another World champion in winning form. The Ethiopian blasted away from the field over the final lap of the 3000m to win in 8:42.04 from Berhane Adere, and her sister Ejegayehou.

The men’s Long Jump went to Brazil’s triple jumper Jadel Gregorio who beat his training partner Chris Tomlinson and another Briton Nathan Morgan. All three broke eight metres but Gregorio snatched the victory from Morgan in the last round with 8.05.

USA’s Chaunte Howard won the women’s High Jump with 1.98m from Amy Acuff and had three excellent attempts at a personal best height of 2.01. Another American, Brad Walker, won the men’s Pole Vault with his best of the year, and the best of the summer season, 5.85m. Japan’s Daichi Sawano was second after clearing 5.75m.

Grenada’s World Indoor champion Alleyne Francique dipped under-45 seconds for the first time this year to win the men’s 400m in 44.94 ahead of Jamaica’s Michael Blackwood, and USA’s Bernard Lagat was beaten in the 1500m by Mohammed Moustaoui. The Moroccan outsprinted the former Kenyan Olympic medallist to clock a PB of 3:34.40, the fourth quickest time in the world.

Britain’s Tasha Danvers-Smith also broke into the world’s top-ten in the women’s 400m Hurdles. The Commonwealth silver medallist ran a commanding race and dipped under 55 seconds for the first time for three years with 54.85. Jamaica’s Keliese Spencer was second in a PB 55.61.

The men’s 110m Hurdlers had the misfortune to meet the day’s only headwind (-2.4). The race was won by Latvia’s Stanislav Olijars in 13.49 from USA’s Dominique Arnold. Commonwealth champion Maurice Wignall crashed into too many hurdles and finished sixth in 14.09.

“It was a hard race with the headwind,” exclaimed Olijars afterwards. Luckily, it didn’t last long. Asafa Powell and the record books will be testament to that.