Five time IAAF World Half-marathon champion Zersenay Tadese will look to continue his incredible record over 13.1 miles when he lines up for the Hervis Prague Half Marathon – an IAAF Gold Label Race – on April 6.

The Eritrean currently holds the World record for the distance with his 58:23 performance from 2010. But with Prague playing host to fast times in last year’s race – where Atsedu Tsegay surprised with his Ethiopian record and world-leading time of 58:47 – Tadese is hopeful of running a fast time in the Czech capital, and perhaps even threatening his own World record.

When it comes to the Half-marathon, Tadese has an outstanding CV. Over the past 10 years he has lost just three races over the Half-marathon. Among his 12 victories over the distance are four wins at the IAAF World Half Marathon Championships (not including his win in 2006, which was held over 20km).

But in his most recent race – running on tired legs just two weeks after his triumph at the IAAF World Half Marathon Championships in Kavarna – he suffered a rare defeat when finishing third in Birmingham.

Tadese, the 2007 World cross-country champion and former 10,000m medallist at the Olympics and World Championships, will not have an easy task in Prague as he will line up against Philemon Limo. The Kenyan was the first man to break 60 minutes in the Czech Republic when he won in Prague two years ago with 59:30.

“Our race was the fastest Half-marathon in the world in 2012,” said Alfred Eichblatt, general manager of Hervis Sport. “This year we are hoping to break the world record!”

"Zersenay Tadese, who will be celebrating his 31st birthday this February, runs an incredibly limited number of races each year, which he selects carefully,” added Jana Moberly, coordinator of elite athletes for the organising team. “We are truly happy that he chose Prague this year.” 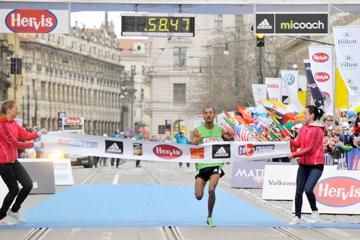