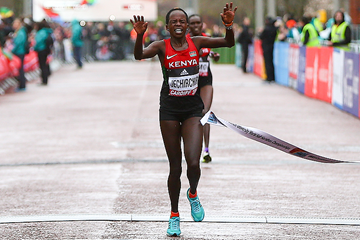 World half marathon champion Jepchirchir to run in Bengaluru

World half marathon champion Peres Jepchirchir will lead the field at the TCS World 10K in the Indian city of Bengaluru on Sunday May 15.

The 22-year-old Kenyan beat some of her more favoured compatriots in Cardiff to land her first global title.

“I am slowly getting used to it,” she said of her new role as a world champion. “It still feels strange, but very good.”

A party in her honour that awaited her back home in Kapsabet probably helped the new superlative sink in.

“When I returned to Kenya from Cardiff, my church community organised a party for me with more than 100 people. It was a fantastic moment, we danced and sang.”

Jepchirchir arrived at the championships with solid credentials, boosted by a 1:06:39 run at the RAK Half Marathon in February. But expectations weren’t high, as she was only fourth in Ras Al Khaimah, finishing behind two runners she would face again in Cardiff, and was just the third fastest on the Kenyan squad.

However, all that mattered little when she pulled away over the final 200 metres to claim her first world title.

“Winning in Cardiff improved my self-esteem and convinced me that a good constant training and professionalism are essential to reach the best goals. I don’t think (being a world champion) will add a lot of pressure but it will surely be more challenging. My career and experience has taught me that if you feel confident in your training you cannot fear the other runners, but you must simply give your best.”

Despite her global achievement this year, 10km might be her better distance. She has a personal best of 30:55 from 2015, which suggests that an assault on the TCS World 10K course record of 31:46, set by fellow Kenyan Lucy Kabuu in 2014, could be in the works.

Jepchirchir said she is aiming for a spot on the Kenyan Olympic team in the 10,000m, and her outing in Bengaluru will prove a good gauge ahead of  the national trials in late June.

Nevertheless, Jepchirchir will not even be the fastest woman in the race as that honour belongs to another Kenyan, Gladys Chesire, whose 30:41 run in Berlin last October placed her as the ninth fastest on the all-time list.

Agnes Tirop, the 2015 world cross country champion who'll be making her road running debut, is another runner to watch, along with Jackline Chepngeno, an outstanding runner at youth and junior levels who will be making her second Bengaluru appearance.

In the men’s race, Mosinet Geremew of Ethiopia will return to defend the title he won in 2015.

"The course is not so smooth in some areas so you have to be careful," said Geremew, who won the Hyderabad 10K three years ago in 27:36, the fastest 10km ever run on Indian soil. "Bengaluru is a big and colorful race and I am really looking forward to coming back."

Geremew is one of eight men in the field who has dipped under 28 minutes for 10km, led by Morocco’s Mohamed Ziani, who clocked 27:28 in Casablanca in March.

The men's field also includes Patrick Makau, the former world record-holder in the marathon who will be racing for the first time in India.

Two-time Amsterdam Marathon winner Bernard Kipyego, who has clocked 28:04, shouldn't be discounted either.