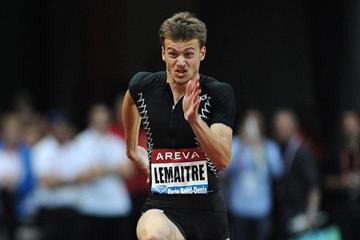 The Herculis meeting, the IAAF Diamond League meeting in Monaco on 19 July, will have the cream of the current generation of French athletes competing in the Stade Louis II once again.

In addition to the previously announced 2012 Olympic and European Pole Vault champion Renaud Lavillenie being present, the 2010 double European champion Christophe Lemaitre will be face the 2013 European indoor 60m champion Jimmy Vicaut in the 100m.

In their six previous confrontations at the distance, Lemaitre has always come home in front of Vicaut, but their most recent encounter was over 60m at the French Indoor Championships in February and Vicaut triumphed.

They are expected to do battle first at the French outdoor championships and, a week later, Herculis will offer them a second occasion to shine.

Impressive new middle-distance talent Pierre-Ambroise Bosse will come to Monaco for the first time and will run the 800m.

Still only 21, the 2011 European junior champion has lowered his personal best in two Diamond League outings this year, in Doha and Rome, and there is no doubt that Bosse will have ambitions of going even faster in Monaco.

Compaore is second in the Diamond Race in their event, with a win in New York and second place in Doha, but the World indoor record-holder Tamgho showed he is returning to form after missing all of last year and the second half of 2011 through injury and jumped 17.30m on Saturday.

The 1500m will offer a chance to several young domestic talents to show off their prowess.

Florian Carvalho took the European silver medal over the distance in Helsinki last summer and is returning to where he set his personal best two years ago.

The 2013 European Athletics Indoor Championships bronze medallist Simon Denissel will be running in Monaco for the first time, and has similar goals as Carvalho in aiming to improve on his personal best.

The 2010 European 200m champion Myriam Soumare, who took a bronze medal in Helsinki in the defence of her title, will compete in the longer sprint while the 2012 European Long Jump champion Eloyse Lesueur is coming back to Monaco, after having a training camp there last month.

After taking third in New York and second in Oslo at this year’s Diamond League meetings, she will be aiming for a big jump at Stade Louis II Stadium, in front of a crowd which will be certainly be cheering for her.