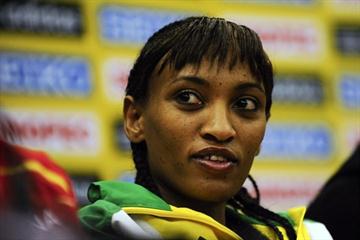 Alessandra Aguilar, Meselech Melkamu and Lineth Chepkurui – three women with different expectations coming into the 39th IAAF World Cross Country Championships – but each with the common goal of self-improvement.

Ethiopia’s Melkamu has won a World Junior Cross Country, but is a woman of bronze when it comes to the senior race. Five times she has finished third, including each of the past two years. She would dearly love for that to change, and also to lead her country back to the top of the team standings.

Lineth Chepkurui is lucky to be here with the Kenyan team. A fall in the women’s race at the selection trial left her having to rely on the selectors’ discretion, not always a quality widely possessed, much less exercised, especially in a country as strong as Kenya.

Clearly Chepkurui is highly-rated. Not only is she here, but she is captain of the women’s team. Dutifully, she praised all her team-mates as capable of winning medals; inwardly, she hopes for an individual one to call her own.

Spain’s Aguilar has run the World Cross Country 12 times. Traditionally, 13 is the unlucky number, but she hopes to lead Spain back on to the medals’ dais at home in Punta Umbria in her 13th appearance. Individually, she cannot hope for much better than a top-20 finish; collectively, she believes her team-mates can take a medal.

The three women were among the athletes at a press conference on championship eve in Punta Umbria. Aguilar echoed the line of her national federation president, Jose Maria Odriozola, and male team-mate Ayad Lamdassen, in lamenting the absence of many of the European nations and individuals.

“To me, the most important thing (in athletics) is to take part in World Championships,” Odriozola had said a few minutes earlier as the organisational representatives met the media. “My message to my colleagues in Europe is to take part.”

Aguliar’s main goal is now the marathon. She acknowledged she found the shorter cross-country distance “tough”, but stressed that was no reason to avoid it.

“The marathon is truly compatible with cross-country,” Aguilar said.

She believed Spain could take the women’s team bronze medal which has gone to five different countries in the past five years.

“Getting to the podium is difficult because Kenya and Ethiopia are always there,” Aguilar said, “but I think the Spanish team this year is really strong, compact. To get to the podium would be really good.”

Spain’s best recent result was fourth place in Amman in 2009.

Melkamu and her team-mates, including three-time individual champion Tirunesh Dibaba, were swept aside by the Kenyan tide in Bydgoszcz last year. There is no Dibaba this time, but Melkamu said it was time to start re-building.

Her nation expects no less. “The Ethiopian people are used to gold medals. They were very disappointed with last year,” Melkamu said.

“Last year we did not have national teams in place. We have done a much better preparation than last year.”

Melkamu, who will be competing in her ninth championship (two junior, six senior to date), has also taken on a leadership role within the team.

“I will be trying my best for good results and encouraging the junior athletes as well,” she said.

Chepkurui’s leadership qualities are rated highly, too. Mercy Cherono said as much after winning the World Junior title in Bydgoszcz.

Twelth, fourth and fifth in the senior race in the past three years, Chepkurui must have briefly thought her chances gone when she fell in the selection trial in Nairobi last month. Her competitive spirit shone through in getting up and finishing eighth and the selectors took note of her other qualities, too.

“When I fell, I was so worried,” Chepkurui admitted, “but because of my previous performances and because I was in good form, perhaps they thought I could be in the team.”

All four of Kenya’s individual title winners from last year failed to make the team. None of them got the benefit of discretionary selection, so Chepkurui is indeed highly thought of.

She said repeating last year’s results would be a challenge, but spoke highly of her team-mates’ ability to do so.

“We are looking forward to it. We have prepared well. We don’t worry (about the opposition).”
Linet Masai and Vivian Cheruiyot are World champions on the track, but Chepkurui warned that the whole team was strong.

“The rest of the athletes are good. They can all go for a medal tomorrow,” she said.