Bondarenko to open season in Tokyo

Almost exactly a year to the day he opened his landmark 2013 season, world high jump champion Bohdan Bondarenko will get his 2014 campaign under way on 11 May at the Seiko Golden Grand Prix in Tokyo, one of two legs of the IAAF World Challenge to be held in Asia.

The Ukrainian, who twice jumped 2.41m last year for a national record, is undefeated for almost a year. After missing an indoor season in which the likes of Ivan Ukhov and Mutaz Essa Barshim set the high jump world on fire, Bondarenko will be keen to return to winning ways when he steps back on to the high jump apron in the Japanese capital next month.

Bondarenko spent most of his winter training at altitude in Spain, but also spent some stints in Formia, Italy, and South Africa.

“I’m doing well and training hard for the outdoor season,” he recently posted on his Facebook page. “At the moment I am in a training camp in South Africa. The conditions here are great to get me in the best shape.”

The Tokyo meeting record has stood to Charles Austin since 1996 with a height of 2.36m, a mark that Bondarenko has matched or bettered just four times. His opening performance of 2013 was a 2.33m clearance, a height which was a PB at the time.

This year’s edition of the Golden Grand Prix will be one of the last international athletics events to be held in the 1964 Olympic stadium, as it will be demolished this summer to make way for the new stadium ahead of the 2020 Olympics. 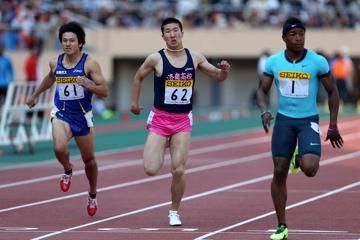