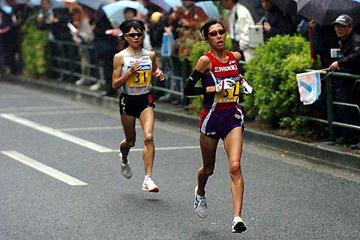 It was Tosa’s third marathon victory, having taken her debut win in Matsuyama and then a first place in the 2004 Nagoya Women’s marathon, which qualified her for the 2004 Olympic marathon team. She was fifth in those Games, having taken the silver at the 2001 World Championships.

Unfortunately for Tosa, the race was run under less than favourable conditions. A drizzle changed to a steady rain by mid-race and the last half was also marred by a head-wind. The finishing time was slower than had been hoped, and because 2:26 was not broken, Tosa did not automatically qualify for the 2007 World Championships team, and now has to wait for the results of the upcoming Osaka Ladies and Nagoya Women’s Marathons.

Takahashi finished a disappointing third.  It was Takahashi’s first loss against another Japanese, her slowest time, and her lowest  finishing place in a marathon since her 2:31:32 debut at the 1997 Osaka Ladies Marathon.

How the race unfolded…

The race started fast with Tosa, sometime leading the pack ahead of the pace makers – Alevtina Ivanova and Olga Romanova. The initial 5Km, which is mostly downhill, was covered in a fast 16:29, only five seconds behind the record pace of 1999. Because rain was very light at the beginning, the anticipation was high for record times, and due to the fast pace, the lead pack quickly dwindled down to eight runners – Ivanova and Romanova, the pace makers, and Tosa, Takahashi, Zivile Balciunate (runner up last year), Olivera Jevtic (European silver medallist), Jen Rhines and Asha Gigi.

Akemi Ozaki, running her second marathon, soon caught-up with the lead pack but Rhines, Jevtic and Balciunaite started to fall off the pace soon afterwards, thus splitting the lead pack into two separate groups. Soon again Ozaki also started to fall behind, and so found herself running for most of the race isloated between the lead and the chase packs.

By 15Km, besides the pace makers, the lead group consisted of Tosa, Gigi and Takahashi.  After 20Km, Gigi, who ran the Berlin marathon in September, also offer the pace.

Three up front at halfway

The leaders - Ivanova (pace maker), Tosa and Takahashi - passed the half marathon point in 1:10:53.  By this time, however, the rain was steadily coming down, so there was little hope for a record time, and after the turnaround point, the wind (now against the runners) was picking up, Gigi was 12 seconds and Balciunaite and Jevtic 48 seconds adrift of the trio upfront.

At 22Km, Takahashi, who was always hiding behind Tosa, took her gloves off, which may have been a mistake, for the weather with the wind-chilling effect was getting colder, and when Ivanova the pace setter dropped out at 27Km, the anticipated showdown between Takahashi and Tosa became a reality.

At 30Km, Tosa and Takahashi were over a minute ahead of the now third placed Ozaki.  The kilometre between 30Km to 31Km was covered in 3:29 by the leaders, and at 31Km, Takahashi threw away another piece of her clothing, this time her cap. Perhaps it was a sign of growing desperation as soon a gap opened up between Tosa and Takahashi.

“I did not surge at 31Km,” said Tosa after the race. Takahashi just fell off the steady pace. The split of 3:32 between 31Km and 32Km proves the point.

Ozaki was now steadily gaining on Takahashi, and with 3Km to go in the race, passed her.

Over a two and a half minute victory

Tosa tried to push over the hill in pursuit of a sub 2:26 time, however, it was not to be, as she took 4 minutes for the 1000m between 39Km to 40Km, which is also the toughest part of the hill. However, the 30-year-old, who was third in Boston earlier this year, was still pleased to have won by more than two and a half minutes with 2:26:15.

“I am very happy to win the marathon,” said Tosa after the race which had been run in a temperature of 10C, with 66% humidity.

“Tomorrow is my husband’s birthday.  I think I gave him a good birthday present,” concluded Tosa, who became the first married female runner in Japan to win a major marathon.

“I just wanted to run at my planned pace, a good pace. The pace makers pulled us along at the right pace, so it was easy in the beginning,” ...while “in the last part of the race, because of the head wind I was getting cold and thus I could not move any faster,” said Tosa,

It had been reported that Tosa was in awesome shape prior to today’s race. “Tosa’s training for this marathon went very well. She did not have any injury problems during the preparation of this marathon,” said Hideo Suzuki who has been coaching Tosa ever since she graduated from the University. “Tosa runs relatively well under bad conditions, so I was not worried about the weather” today.