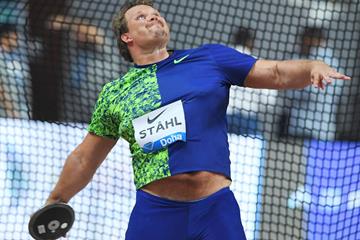 The 57th Paavo Nurmi Games on 11 June are promising to be the one-day meeting’s finest-ever edition of this IAAF World Challenge meeting. In addition to the two super bonus events, where the winner of the men’s discus and javelin competitions can win an island if they achieve a Finnish all comers record, there are plenty of other high quality fields.

The men’s discus field is extremely strong, with each of the 10 entrants with a personal best well over 65 metres. Swede Daniel Ståhl, having already thrown a 70.56 season’s best and a big 70m+ foul in Stockholm last week, is looking for the big one in his second home town. His grandmother still lives in Turku, and an island in the Turku Archipelago would be perfect for Ståhl, who speaks fluent Finnish.

A distance of 70.99m is what’s needed for the island, a centimetre better tha Mac Wilkins’ 70.98m effort in Helsinki 9 July 1980. There is also a good challenge behind the top thrower: Jamaican Fedrick Dacres, who placed fourth at the 2017 World Championships when Ståhl won silver. Dacres threw a season’s best 68.96 in Stockholm, the second best throw of his career behind his personal best of 69.67m, also in Stockholm last summer. The Olympic champion from Rio 2016, Germany’s Christoph Harting, a new name from Norway, Ola Stunes Isene (67.78 in 2019) and a 67.57m thrower from Jamaica, Traves Smikle, are also in the competition.

In the men’s javelin, 2016 Olympic champion Thomas Röhler heads the field. The 27-year-old has already thrown 90 metres twice in Turku, both in 2016 when he hit a world leading 91.28 m and a 91.04m later in that competition. The German also won in 2017 and placed second in 2018. Fellow German Andreas Hoffmann is injured and will miss Turku this time, but there is a strong challenge anyway for Röhler.

Magnus Kirt of Estonia, the winner in Turku last year with an 88.73m national record, is back at the Paavo Nurmi stadium. The 29-year-old won in Vantaa, Finland, last week with an 89.33m world lead in his season opener and then won the Gustav Sule Memorial in Tartu with 87.65m. Meanwhile 26-year-old Bernhard Seifert recently threw a big personal best of 89.06m in Offenburg and is looking for his first 90-metre throw in Turku. Also in are 2012 Olympic champion Keshorn Walcott, 2014 European champion Antti Ruuskanen, 88m thrower Oliver Helander, and Julian Weber of Germany. The Finnish all-comers record needed for the island is held by Aki Parviainen at 93.09m set in Kuortane on 26 June 1999.

In the men’s 100m Americans Justin Gatlin, the 2017 world champion, and Mike Rodgers go head to head. In the men’s 800m Kenyans Alfred Kipketer and Cornelius Tuwei are the top names along with Ethiopian Mohamed Aman, the 2013 world champion in the race. The 3000m steeplechase includes 2019 Asian champion John Koech (BRN) and Nicholas Bett (KEN). In the 110m hurdles Garfield Darien of France goes against American Freddie Crittenden. In the long jump 23-year-old American Zack Bazile, with a personal best of 8.37m last summer, tops the field with 25-year-old Chinese Zhang Yaoguang, who jumped a 8.29 PB also in 2018.

The top women’s event is the hammer throw, where four-time world champion and world record holder Anita Wlodarczyk of Poland goes against Chinese Wang Zheng. Wang won silver at the 2017 World Championships and has a personal best of 77.68m from 2014. Hanna Malyshik (BLR), with a 76.26m personal best in 2018 and Malwina Kopron (POL), 76.85m PB in 2017, are the challengers for the top duo.

In the other women’s events American Shania Collins, with a 10.98 personal best in 2018 goes against another sub-11 second runner, Chinese Wei Yongli, who ran 10.99 also last summer. Ugandan Winnie Nanyondo has already broken 1500m national record in 4:01.39 this season and heads that event.

In the pole vault the top two Americans go head to head. Five-metre jumper Sandi Morris is joined by Jenn Suhr, who has already cleared 4.91 this season. Morris, the 2018 world indoor champion Morris jumped 4.95 last year with 37-year-old Suhr, the 2012 Olympic champion, a 5.03 jumper indoors in 2016, coming close to her best results in 2019. Israeli Hanna Minenko, the 2015 world silver medallist, tops the triple jump while new American shot put star Chase Ealey is looking for another win in Turku. A 19.67m personal best and a first Diamond League win in Shanghai in May make her a top name in 2019. Jamaican Danniel Thomas-Dodd has already set a 19.48 national record this season while Anita Marton of Hungary, the 2018 world indoor champion, has the best personal best in the field with at 19.87 from the 2016 Olympics where she took bronze.

Mirko Jalava (organisers) for the IAAF

Mirko Jalava for the organisers