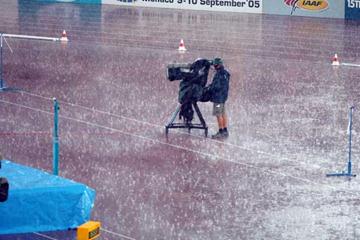 The IAAF is pleased with the preliminary television data received for the 10th edition of the IAAF World Championships in Athletics, which took place from August 6-14 in Helsinki.

In the markets for which preliminary television data has been secured, the total number of dedicated programmes has increased by 16% when compared to the last Championships staged in Paris in 2003 with TV audience ratings averaging 3.5% across the full nine days.

More than a quarter of Finns tuned in on 10 August

Looking at the host market, with the IAAF World Championships in Athletics taking place in Helsinki, primary, dedicated broadcasts in Finland drew a cumulative audience of 20.2 million which is 2.5 million more than that achieved in 2003. The top rating among the 55 Finnish broadcasts was produced on the evening of August 10 and was 27.3%, meaning that over one quarter of the Finnish population were viewing the competition. What's more, on the morning before, the market share reached an amazing 87% meaning that 87% of people watching TV at that time were tuned into YLE's coverage of the athletics.

Major increases in the Nordic countries

There were also positive signs among the other Nordic countries. Denmark, Norway and Sweden all aired more broadcasts of Helsinki 2005 than of Paris in 2003 and audiences were also significantly higher. Denmark's audience was 57% higher than in 2003 and in Norway and Sweden the % gains were similarly high equating to rises of 3.6 million viewers and 12.5 million viewers, respectively on those achieved in 2003.

Eurosport also broadcast more of the 2005 Championships compared with 2003. The 44 dedicated broadcasts of Helsinki 2005 (16 more than Paris) generated a cumulative audience of 57 million viewers, which is more than a 50% increase on the 2003 figure.

In Japan, the cumulative household figure in 2005 was 32.9 million higher than 2003. Average household ratings for Helsinki were comparable at around 10%. As with 2003, both Marathon races held in the final weekend proved to be very popular among the Japanese viewers and received an average rating of 22%. There were also more broadcasts on TBS in 2005 compared with 2003, resulting in 119 more hours of coverage.

In the USA, there was unprecedented coverage of the Championships in terms of the number of hours made available. Provisional ratings received for the daily one hour highlights programme shown on PAX TV across the country are approximately double those of the 2003 World Championships coverage. In addition, early indications are that strong ratings will have been achieved with the coverage on CSTV as well as the additional regional broadcasts by Comcast. On top of this, the inaugural live webcast in the USA of the entire Championships, available on a subscription only basis, was a success with a large amount of positive feedback from those US track and field fans who accessed the service.