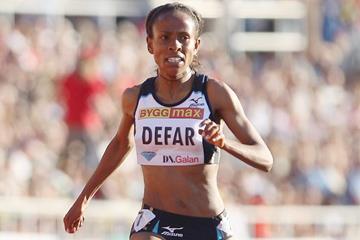 The IAAF World Championships came to a close last Sunday and many of the newly-crowned World champions will compete in Stockholm on 22 August at the DN Galan, the next leg of the IAAF Diamond League.

Sweden’s own World champion at 1500m, Abeba Aregawi, will step down to the 800m where she will face the World champion in that event, Eunice Sum of Kenya. The pair have already competed against each other once this year, back in May at the Diamond League meeting in Doha where they both posted their fastest times of the season over 1500m.

The World champion in the men’s 1500m, Kenya’s Asbel Kiprop, will also be in Stockholm. Among those he’ll be up against are Olympic silver medallist Leonel Manzano and World 800m bronze medallist Ayanleh Souleiman.

Another World champion set to compete in Stockholm is German javelin thrower Christina Obergfoll, who will be celebrating her 32nd birthday on the day of the competition. Young Swedish talent Sofi Flink, who set a national record to book her place in the final at the World Championships, will be one of Obergfoll’s opponents in Stockholm.

“It is fantastic to be able to present so many World champions and medallists from Moscow,” said Anders Tallgren, head of operations at DN Galan. “It bodes well for an exciting competition with some interesting grudge matches.”