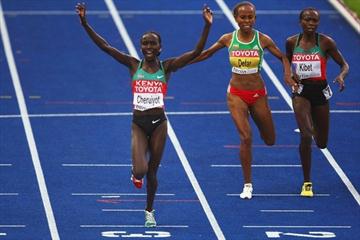 The Aviva Grand Prix is the penultimate stop on the nine meeting IAAF Indoor Permit series for 2010.

The world’s best indoor time for Two-Miles is 9:06.26, set by Dibaba’s arch rival, fellow Ethiopian Meseret Defar in Prague on 26 February 2009; a time seemingly within reach of Dibaba and Cheruiyot.

Cheruiyot, who picked up gold in Berlin last year, has never beaten Dibaba on the track before, with their overall ‘head to head’ career win / loss record 13 to 2 in favour of the Ethiopian. Cheruiyot’s two ‘wins’ over Dibaba have come at cross country; in 2001 when she beat he in the World Junior XC race (4th place to 5th), and in the senior World Cross short course race in 2006, when she came 8th in a competition which Dibaba didn’t finish.

Despite such unbalanced ‘head to head’ career statistics Cheruiyot is looking forward to the race.

“I’m really excited about racing in Birmingham, my training has been great and I am looking forward to racing against Dibaba,” said the Kenyan. “I am the World champion, she is the Olympic champion - we’ll be pushing each other all the way so I’m hoping for a quick time and hopefully a world record (best*). Birmingham has good memories for me as I won the 3000m event here last year in a Kenyan record. I’ll be aiming for another victory this weekend.”

Dibaba, Beijing Olympic champion over 5000m and 10,000m, who missed the Berlin World Championships while recovering her fitness after injury, also confirmed that she was “looking forward to competing in the UK again after I won the 5000m at the Aviva London Grand Prix last year. I know it will be a tough race in Birmingham but I’m feeling on good form and expect to run well. Vivian Cheruiyot is a great athlete so I’m sure it will be a fast race.”

Lucy Buglass (Organisers) for the IAAF

*Note: The IAAF does not recognise or ratify World records over Two-Miles