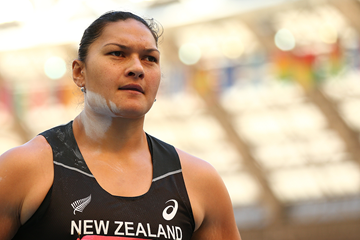 The IAAF female athlete of the year underwent surgery during the winter, which delayed the start to her summer season. After four competitive outings over the past month and a season’s best of 18.79m, the 30-year-old says she is simply not ready to compete at a major championship.

“I have thought about this long and hard and I know it’s the right thing to do,” she said in a statement posted to her Instagram account. “All those who know me know how competitive I am and how much I love competing in the black singlet.

“This has been a tough comeback, but I’m glad I made an attempt this season as it has just boosted my motivation more for the Olympics, which has always been the main focus.

“Deep down this is not easy but I’m a realist and I know I’m not ready just yet,” she added. “I still have stuff to work and it’s been a challenge since my surgery on my elbow especially as it has and is taking more time than I thought it would.

“My right knee also needs some tender loving physical care and that will be attended to as soon as I hit New Zealand soil. But I want to take this time to thank you all for the continued belief and support throughout my career especially in the past 10 months.

“No one said it would be easy but I’m a willing participant and will continue to fight and work towards defending my title in Rio 2016.”