Levy Omari Matebo will make his Vienna City Marathon debut on 10 April and will be the fastest man in the field at the IAAF Gold Label Road Race.

The Kenyan’s last marathon victory dates back to 2011 when he won in Barcelona in 2:07:31, but later that year the 26-year-old improved his personal best to 2:05:16 when finishing second to Wilson Kipsang in Frankfurt. His PB is 25 seconds quicker than Vienna’s course record.

Matebo went on to finish second at the 2012 Boston Marathon and seventh at the 2014 Berlin Marathon, but was affected by injury problems for most of 2015. After a solid 2:09:54 return in Ljubljana last October, Matebo intends to be in top shape when he competes in Vienna.

While more athletes will be added to the elite field in the coming weeks, at the moment three Kenyans look to be strong rivals for Matebo.

Robert Chemosin’s personal best of 2:08:05 was set on his debut at the distance last year in Warsaw. His half-marathon PB of 59:19 suggests that his marathon best could be due for revision.

Suleiman Simotwo is another Kenyan with great speed. He took fifth place in Vienna last year on his marathon debut and then improved to 2:08:49 in Frankfurt last October.

David Kogei will be making his marathon debut in Vienna. The Kenyan, who has a personal best of 59:46 for the half marathon, acted as a pacemaker in the Austrian capital last year and then did the same job at the Berlin Marathon, where he helped guide Eliud Kipchoge to a world lead of 2:04:00. 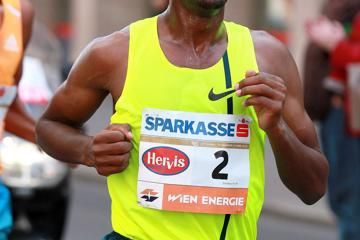 Lemma and Neuenschwander take the honours in ...