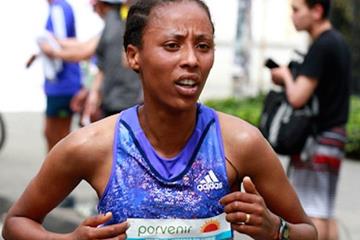 The Vienna City Marathon has recruited a contingent of fast women in a bid to have quick times return to the Austrian capital at the IAAF Gold Label Road Race on 10 April.

But Ethiopia’s Guteni Shone has the potential to challenge Viceconte’s 16-year-old standard.

Shone is the fastest among the women announced by the organisers on Wednesday (23) with a personal best of 2:23:32, which she clocked when finishing second at the 2015 Houston Marathon.

With a best of 2:26:09, Namibia’s Helaria Johannes is the second-fastest woman on the start list, but two Ethiopians have publically stated that they are aiming for a time below 2:25:00: Fantu Jimma and Meseret Kitata.

In contrast to Jimma, the 22-year-old youngster Kitata has already won a major international marathon. Last year, she took the Rome Marathon title when she clocked 2:30:25 in rainy conditions on slippery roads but later in 2015 she improved her personal best to 2:27:17 when fifth in Frankfurt.

Another Ethiopian, Shuko Genemo, also aims to improve when she comes to Vienna. She clocked 2:27:29 when finishing third in the Chinese city of Hengshui last year. In January, she won the Mumbai Marathon with 2:27:50.

Two other women also have the potential to produce a surprise in Vienna. Ethiopia’s Ruti Aga has shown good form over the half marathon this year. First, she clocked a personal best of 1:08:07 at the Houston Half Marathon in January, finishing fourth, and then she won the Lisbon Half Marathon last Sunday in 1:09:16. The Ethiopian will make her marathon debut in Vienna.

Kenya’s Doris Changeywo had her first marathon experience last December when she won the Singapore Marathon in 2:44:26. It was a great debut win in humid conditions and the time certainly does not reflect her potential. Changeywo has personal bests of 31:26 for 10km and 1:08:49 for the half marathon.

Including other running events staged parallel to the marathon, the race organisers expect more than 40,000 runners to take to the roads of Vienna on 10 April.