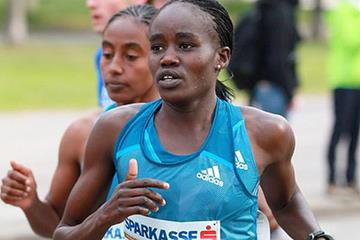 Chepkwony returns to Vienna for revenge

Caroline Chepkwony hopes to gain revenge when she returns to the Vienna City Marathon to compete against defending champion Anna Hahner at the IAAF Gold Label Road Race on 12 April.

The Kenyan was sensationally beaten by Germany’s rising marathon star a year ago when she faded badly in the final stages. Organisers hope for a similarly thrilling women’s contest this year as a total of seven women with personal bests between 2:25 and 2:30 are on the start list.

Last April Chepkwony looked certain to take a second marathon victory in a row. The 2013 Lubljana champion, who clocked her personal best of 2:27:27 in that race, was almost two-and-a-half minutes ahead at the 35km point. But the picture changed dramatically in the final few miles.

The Kenyan suffered from stomach problems and could barely jog. With 300 metres to go, Hahner passed her and stormed to a totally unexpected victory, running 2:28:59 with Chepkwony 19 seconds behind in second place.

But it will not just be Hahner against Chepkwony in Vienna next month. Esther Chemutai won last year’s Turin Marathon in 2:28:41 on her debut at the distance. Vienna will be just her second marathon to date.

The fastest runner in the field is Ethiopia’s Fate Tola. The 27-year-old has great memories of the Vienna City Marathon, having won in 2011 and 2012. Tola, who has a personal best of 2:25:14, is not expected to be in top form as she is currently returning from maternity leave, but she recently won a half marathon in Frankfurt with 1:13:41.

Another runner who has won a major marathon in the past is Japan’s Noriko Higuchi. She won the 2011 Tokyo Marathon in 2:28:49.

With so many athletes having won major races already, this could become one of the best women’s races in the history of the Vienna City Marathon.

In contrast, the men’s race at present looks like there is one big favourite: defending champion Getu Feleke, who ran a course record of 2:05:41 last year. It is this mark he hopes to further improve in Vienna next month.

Two fellow Ethiopians will be among his strongest rivals. Sisay Lemma was fifth at January’s Dubai Marathon in 2:07:06, while Gebo Burka has a fresh personal best as well; he was second in Houston this winter with 2:08:12.