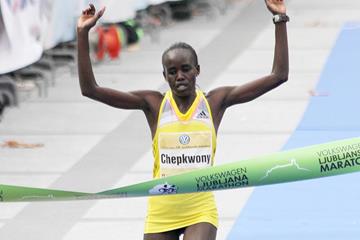 Chepkwony and Ito the favourites, but Hahner hopes to waltz in Vienna

“Everybody waltz” is the motto of the 31st edition of the Vienna City Marathon on 13 April. But who will waltz first at the IAAF Gold Label Road Race?

“If my race goes well, I will waltz after crossing the finish line,” says Anna Hahner. If the German is in good form she might be able to compete for a place on the podium in Vienna, but the favourites come from elsewhere.

Kenya’s Caroline Chepkwony will be challenged by Mai Ito, who hopes to become the second Japanese athlete to win in the Austrian capital.

The long history of the race shows there have only been four Kenyan women to have crossed the finish line first on Vienna’s impressive Heldenplatz. One of these wins came last year; a parallel that could be a good omen for Chepkwony.

In 2013 Flomena Cheyech improved her personal best by almost ten minutes when she ran 2:24:34. Before that, Cheyech won the Rome-Ostia Half Marathon with a personal best of 1:07:39.

Chepkwony chose the same race schedule this year and was equally successful, winning this year’s edition of the same Italian race in 1:08:48 on 2 March, beating fellow Kenyan Sharon Cherop, the 2012 Boston Marathon champion, by three seconds.

Japan’s Mai Ito has far more experience in marathon running and has a personal best of 2:25:26 from the 2012 Nagoya Marathon. Ito has been consistent at the sub-2:30 level in recent years, but has not yet managed to win a big marathon.

The 29-year-old will hope to finally achieve this in Vienna, following in the footsteps of 2006 winner Tomo Morimoto, who won in 2:24:33. But the main difficulty for Ito will be the fact that she will be racing just seven weeks after running the Tokyo Marathon, in which she finished seventh in 2:28:36.

Russia’s Olga Glok, who set a PB of 2:27:12 when finishing second in Vienna two years ago, and Kenya’s Alice Chelangat, who has a best of 2:29:47, are also expected to challenge for podium places.

Hahner will be paced by her twin sister Lisa and hopes to run faster than 2:30 for the second time in her career. The 24-year-old significantly improved in Frankfurt last year, when she clocked 2:27:55.

“In my preparations for Vienna, I have trained in Spain and Kenya recently,” said Hahner, who together with her sister has been coached by Italian Renato Canova since last spring.