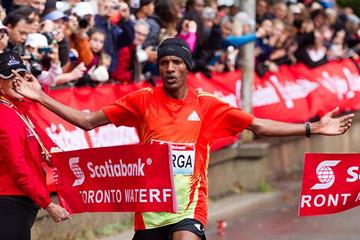 It’s no wonder, then, that the race organisers are delighted to announce that he intends to defend his title at this IAAF Silver Label Road Race on 20 October.

After battling with the elements last year, the affable 29-year-old also has his sights set on a course record. The current mark, which is also the fastest time ever run on Canadian soil, is held by Kenya’s Kenneth Mungara at 2:07:58.

Warga’s 2012 winning time of 2:10:36 was a splendid effort taking into account the temperature, around 18 degrees Celsius, and wet conditions.

“It was my first and my greatest victory in a Marathon,” commented Warga on Tuesday.

“Also I was the first Ethiopian winner of the race. I was injured before I arrived in Toronto and I wasn’t confident up to 25km. But I won after those difficulties.”

“I need to defend and to run under the course record,” he added. “It’s always difficult to say I can do this or that in a Marathon but I hope I can run under 2:08.”

The news of his 2012 victory and the $20,000 prize money was delivered to his wife by a friend who had been following the race via the Scotiabank Toronto Waterfront Marathon’s live internet stream.

Much has changed in Warga’s life since he won Toronto. For one thing, his family has grown. Six months ago his wife, Wudnesh Berta, gave birth to the couple’s second child, a girl they named Yordanos Sahle. They also have a two-year-old son, Ezra Sahle.

Warga has also furthered his marathon-running career. Earlier this spring he recorded a personal best at the Paris Marathon with a time of 2:08:19 and that race, and the way he ran it, underscores his belief he can run much faster.

“It was a very good race and I ran with the leaders up to 33km and I continued on my own pace after the leader was pushing,” he says of the race that was won by Kenya’s Peter Some in 2:05:38.

Records on his radar

According to his personal coaches, Gebeyehu Berihun and Gemedu Dedefo, Warga is in much better shape than he was a year ago.

The group have preferred training sites on the outskirts of Addis as running in the city is near impossible due to the crowds, the pollution and heavy traffic. Warga’s favourite places are Sululta and Entoto where the altitude is between 9000 and 10,000 feet above sea level, which he considers perfect for a Marathon training buildup.

Growing up in the village of Kebul in the south of Ethiopia, Warga was introduced to distance running while in school. He remembers his first race as a high school student.

“Yes, I remember it very well. I ran 1500m when I was a grade 10 student and I won that race,” he recalls. “In high school after I saw my friends run I began running. There weren’t athletes from my village but I listened to many things about Haile (Gebrselassie).”

His performances are legendary in Ethiopia with villagers across the country following him via radio and word of mouth. His exploits also left an impression upon Warga.

“In 2001, after I finished my high school,” he explains, “I decided to continue in athletics, so I moved to Addis to start my career.

“I now live in Addis Ababa, the place called Adisu Gebeya (New Market), and I spend most of my spare time with my family. I have a two-year-old son and a six-month-old daughter and I spend my spare time playing and taking care of my children,” reflected Warga.

Everyone hopes that conditions for the 2013 Scotiabank Toronto Waterfront Marathon will be ideal for fast times, perhaps helping a runner to a Canadian all-comers' and course record.