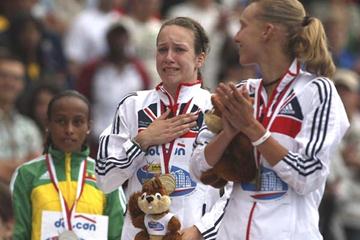 Great Britain's Stephanie Twell believes her 1500m victory on the final day of the IAAF World Junior Championships in Bydgoszcz points to a great senior career.

Describing the win as "overwhelming", Twell, who turns 19 next month, hinted the victory could not have come at a better time in her career.

"To be a world junior champion before stepping on to the senior world athletics stage is important and a part of my development as an athlete," she said shortly after her well-executed run.

Twell's biggest achievement before Sunday's race had been double European junior cross-country titles, something she said is totally different from racing on the track.

"I think you have to be mentally and physically stronger for the track," she added. "I can now go out there and be a great senior athlete because of what I learned here today.”

It was a well-timed victory by Twell. She won by about 15 metres, though she did not make her move until 200m to go.

Ethiopian Kalkidan Gezahegne went out early and was unchallenged for the first 400m and led right up to 200m to go.

It was then time for Twell to make her move and, entering the backstretch, she cut to the lead. By the time she reached the 200m mark, she was ahead.

Entering the home straight, Twell opened her lead and powered down the straight to take victory in 4:15.09. Gezahegne held on for second in 4:16.58 while Britain's second entry and Twell's training partner Emma Pallant was third in 4:17.06.

"I came away from here learning a lot, like how to race more tactically and be strong at racing and just don't be dictated by the Africans, but just to show them that I am here to ruffle a few feathers too," said Twell, the European junior 1500m silver medallist.

"I really enjoy pressure. Other people have expectations of me, but I have a greater expectation of myself, so I think I enjoy it (pressure)," she added.

Asked if she was happy with the time, Twell, who recorded a personal best of 4:06.70 last year, was quick to say: "for a tactical race, yes, I am very happy, considering it was such a slow first lap."