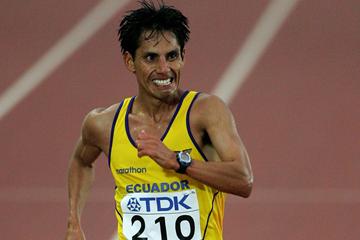 What makes a great Race Walker? A look at some of the legends - IAAF World Race Walking Cup

What makes a great race walker?

Winning of course. But there are plenty on the IAAF World Walking Cup list since the first competition in 1961. So, to pick 10 from an illustrious cast of dozens there are other factors to consider. Longevity is one of them.

Race walking expert and IAAF correspondent Paul Warburton shares his all-time top-10. Do you agree? Or did he leave anyone out? Share your thoughts and discuss on the IAAF's World Athletics Club page on Facebook!

No surprise this top 10 has a few who were happy to come back for more, with one about to have his ninth go at in Saransk at the IAAF World Race Walking Cup on 12-13 May.

Personality? Winning is one thing, but two walkers on this list never did – and still managed to leave an indelible mark on the World Cup. And personality not just expressed through walking, but also linked with ambassadorial skills that increased the sport’s standing.

This man had the lot. Perez harnessed blistering speed with a ferocious will to win. He also provided Ecuador with a first Olympic gold medal in 1996, and won three IAAF World Walking Cup 20kms between 1997 and 2004.

He walked at the very top for 14 years and there are few in modern history to match him.

But where the 1:74m Ecuadorean stood head and shoulders above the rest was a perfect walking style.

He was never vaguely close to disqualification in 15 major championships, and sported an action so smooth a George Clooney chat-up line was clumsy by comparison.

WHEREAS Perez had the perfect style – Garcia did not.

In fact, the Spaniard always appears to battle for every stride.

For mere mortals, i.e. the rest of us – Garcia is the perfect role model of what can be achieved through adversity.

The head bobs, the arms are often too high and at right angles to his torso, and the foot plant is more ten-to-two than straight ahead.

But what Garcia lacks in technique, the 42-year-old makes up for with an amazing haul of medals in every major competition except the Olympics.

IAAF World Championship and European success straddle a 19-year-career of first and two silvers in the World Cup.

His 50k gold in a near snowstorm at Podebrady 1997 was a then fastest time for the Cup, and Saransk in May will be a ninth appearance in a row to go with a proud record of never finishing outside the top 14.

THERE is not a lot left to be written about a man who has nine major golds including four Olympics – except that he never won a World Cup.

In fact, the Polish legend’s first 20k appearance was a lowly 40th in L’Hospitalet in 1989, and his best was a swansong second trying to catch Jefferson Perez in Naumburg, 2004.

However, he is not only a great athletic legend, he is also a great dancer, as witnessed at the post Cup banquets where his personality filled the room, and hence his appeal on Polish TV. He also effortlessly speaks five languages.

In contrast to a stream of faceless eastern Europeans, for a decade Korzeniowski was a Pied Piper to ambitious walkers who followed him around picking up advice, and was and is an outstanding ambassador for the sport.

SHE was never a winner – but nobody could fault Kerry Saxby-Junna’s effort.

The Aussie with a mane of blond hair jutting out behind her was an inspiration to a generation of walkers simply because she gave it everything.

The sight of Saxby-Junna collapsing over a World Cup finish was commonplace after her first appearance on the Isle of Man to her last in Mezidon – and unlike some prima donnas – she really suffered.

There were plenty who settled for second before the gun. But the native of tiny Ballina right up in Australia’s north-east was a fixture at the front with a series of heart-stopping efforts that got her silver in the 1989 World Cup behind the GDR’s Beate Anders.

Walking’s world rejoiced when Saxby-Junna was duly rewarded at the very last chance of her career with a bronze in the 1999 IAAF World Championships prior to retirement.

THE great Russian’s flirtation with the then Lugano Trophy lasted only three years – but he was second in them both.

There was a presence about Golubnichy few before or after have reproduced, and although he was never at his ultimate best in the World Cup, two Olympic golds in contrasting conditions as well as European success in 1974 left a lasting legacy for others in red vests to emulate.

BY THE time Nikolayeva won the 20k in Naumburg at her last IAAF World Walking Cup in 2004 – she had won everything else.

But although she had a bronze and silver from previous World Cups and led for a very long time in 1999, the complete set eluded her until a farewell performance in the former East German town.

Her perseverance saw her finally atop the podium at the age of 38 to underline the old adage, if at first you don’t succeed etc.

And although she had retired by then, Nikolayeva’s work and status behind the scenes helped Cheboksary and Russia claim World Cup host status for the first time in 2008.

THE moustachioed Mexican joins a list of only four who claimed a hat-trick of World Cup wins – and only the second with German Christophe Hohne who did it over 50k.

The sight of Gonazales leaving the rest for dead on his 1977 debut set a marker for the next three editions, and whether it was north, south or at middle European venues, it worried the man not a bit as he got on with the job of winning.

His command of the event was synonymous with a Mexican dominance between 1977-1983 culminating in 20k Olympic silver and 50k gold in 1984.

“Mas contento…” was a comment of some understatement as he climbed the podium in Los Angeles.

SINCE 2007 the slight Russian’s name has been first on every result sheet.

Kaniskina makes it look as if the whole thing is agony almost from the first lap, but her contorted face is betrayed by an effortless style – and for the most part, she’s got used to wrapping up the result long before the end, despite the appearance of pain.

A World Cup debut fifth in 2006 became gold on home soil two years later, and with a bit more competition she would have produced a second world record on a day when Denis Nizhegorodov had already smashed the 50k mark.

How many more World Cup wins can 27-year-old produce? Well, Yelena Nikolayeva was 38 when she won a 20k, and Kaniskina if anything looks even more dominant.

THE 1964 Olympic gold medallist was the first Lugano Trophy winner – and he not only repeated the success two years later – he made it look easier.

There was never a chance of a close finish in the Swiss city that leant its name to the trophy. In fact, the man from Birmingham was nearly a minute clear at 5k, and was the best part of two minutes ahead of second at the line.

If that was good, the three minutes Matthews won by in Varese, Italy in 1963 was a precursor to a glorious October day in Tokyo a year later, and the last Olympic walking gold by a nation who collected 15 major medals in the 20th century, and nothing since.

FOR a long while it looked as if the belle from Barcelona was destined to be a bridesmaid wearing bronze.

Some would have been grateful just for that, but after four major third places including Naumburg 2004, the athlete born on Boxing Day battled to the front in Chihuahua two years ago.

On a hot, tough evening years of experience paid off as Vasco finally made it to the top of the podium at age 34 and made the sunset all the brighter with a beaming smile.