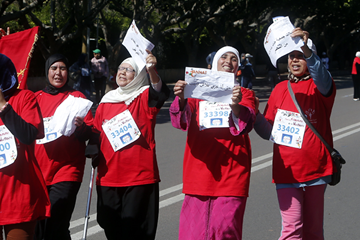 Participants at the Women&#39;s Race to Victory in Rabat (Organisers) © Copyright
15 MAY 2016 General News Rabat, Morocco

More than 30,000 women and girls from different social backgrounds took to the streets of Rabat on Sunday (15) to take part in the ninth edition of the Women’s Race to Victory, an event organised by two-time world 400m hurdles champion Nezha Bidouane.

Organised under the patronage of King Mohammed VI, the 8km race brought together participants of all age groups, not just from Morocco but also from several other African countries as well as Canada, France and Spain.

Participants ran, walked or alternated between the two, depending on their ability. The focus, after all, was not on the competition aspect but rather the opportunity to educate women and girls about the importance of sport as a tool for social integration, contributing to the development of women's sport.

Ever since the inaugural Women’s Race to Victory in 2008, thousands of women of all ages have taken part in this race in a festive atmosphere in one of the first gatherings of its kind in Morocco and the Arab-Muslim world.

Mohammed Benchrif for the IAAF