On a night like this in the Jawaharlal Nehru stadium the Commonwealth Games in Delhi made complete sense. A packed crowd greeted a succession of home medals on Tuesday (12), including another gold to add to the one won the previous evening by discus thrower Krishna Poonia.

As the Games track and field action came to the end of its programme – only Thursday men’s and women’s marathons remain – India won five medals on the night, joint second with England, and only one less than, inevitably, Kenya.

Of those five home medals, four were bronze – in the men’s Triple Jump, men’s Javelin Throw and the two sprint relays. The crowning glory as far as the bulk of the spectators were concerned came in the women’s 4x400m Relay, where the Indian quartet of Manjeet Kaur, Sini Jose, Ashwini Akkunji and Mandeep Kaur won in 3:27.77, with Nigeria second in 3:28.72 and England third in 3:29.51.

India will be a force to be reckoned with at the next Asian Games, and may start to make an impact now at world and Olympic level.

Another medal sweep for Kenya

In the area where they traditionally excel – 800m up to 10,000m, and the 3000m Steeplechase, Kenya gathered the reward for investing their talent in a Games which many leading athletes decided, for various reasons, not to attend.

Kenya’s men earned clean sweeps in the 800m and 3000m Steeplechase, and took gold and silver in tonight’s slow and tactical 1500m final thanks to Silas Kiplagat and James Magut, who recorded 3:41.78 and 3:42.27 respectively.

Were it not for the defiant talent of Uganda’s Moses Kipsiro, they would have had sweeps in the men’s 5000 and 10,000m, but Kipsiro spoilt that ambition by completing a personal double.

It was much the same story in the women’s events, as Olympic champion Nancy Langat won the 800/1500m double, Grace Momanyi and Doris Changeywo took gold and silver in the 10,000m and a clean sweep was achieved in the 3000m Steeplechase.

Scotland’s Steph Twell made a bold effort to make the podium, but had to settle for fourth in 16:03.91.

Kashinath Naik’s 74.29m release in the Javelin Throw was enough to earn India bronze, with gold going to Australia’s Jarrod Bannister (81.71m) and silver to Stuart Farquhar of New Zealand (78.15).

In the Triple Jump the title went to Nigeria’s Tosin Oke, who recorded 17.16m, although Lucien Mamba Schlick of Cameroon almost stole the gold with a final effort of 17.14, a national record.

To general dismay, this took him past home jumper Renjith Maheswary, who jumped a national record of 17.07.

Australia’s Alana Boyd won the Pole Vault with a season’s best equalling height of 4.40m, with Marianna Achariadi of Cyprus getting silver with the same height on countback. England’s Kate Dennison took bronze with 4.25.

England sprint relay teams completed a double, with Mark Lewis-Francis anchoring the men to victory in 38.74sec, ahead of Jamaica – not fielding their strongest team at these Games – who were timed at 38.79 and India, who clocked 38.89.

The women won in 44.19, thus maintaining England’s record of taking a medal in the women’s sprint relay in every edition of the Commonwealth Games, from 1930 to now.

For Katherine Endacott, their first runner, it was a doubly memorable night as her gold was supplemented by silver.

A statement from the Commonwealth Games Federation said the English sprinter had been moved up from bronze to silver following the confirmation of Osayemi Oludamola’s positive doping test.

The Nigerian had inherited the 100m gold after Sally Pearson of Australia, who crossed the line first, had been disqualified for false-starting before last Thursday’s final. “Well I won’t forget this championships in a hurry will I?” said Endacott, a 30-year-old teaching assistant from Plymouth. 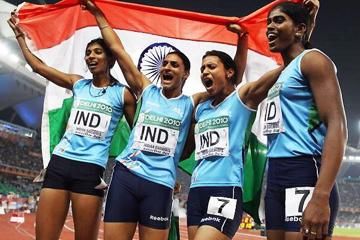