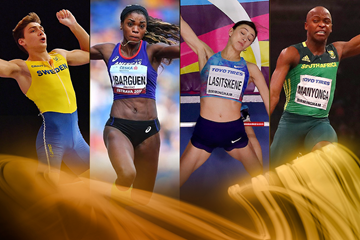 With just six days to go before voting for the 2018 World Athletes of the Year concludes, here’s a closer look at this year's men’s and women’s nominees in the jumping events.

Armand Duplantis had already established himself as one of the most exciting emerging talents in athletics, but this year the Swedish pole vaulter took his place among the world’s senior elite. He improved on his own world U20 record on more than one occasion during the first half of the year and then won at the IAAF Diamond League meeting in Stockholm in front of a home crowd.

The 18-year-old won the world U20 title in Tampere, but the high point of his season came at the European Championships in Berlin where he smashed his own world U20 record to win with a world-leading 6.05m.

Caterine Ibarguen this year continued her dominance of the triple jump but also took on the world’s best in the long jump. She won both events at three of her biggest competitions of the year: the Central American and Caribbean Games in Barranquilla, the IAAF Diamond League finals in Brussels and Zurich, and the IAAF Continental Cup Ostrava 2018.

The Colombian won all of her triple jump competitions this season and jumped a world-leading 14.96m in Rabat. She also set a national long jump record of 6.93m.

Mariya Lasitskene won 25 of her 26 competitions in 2018, winning at the IAAF World Indoor Championships Birmingham 2018, the European Championships in Berlin, the IAAF Diamond League final in Zurich and at the IAAF Continental Cup Ostrava 2018.

She jumped world-leading marks of 2.04m both indoors and outdoors and jumped 2.00m or higher in 16 competitions.

Luvo Manyonga showed incredible consistency in the long jump throughout the year, jumping between 8.18m and 8.58m in all 18 of his competitions in 2018. He set an African indoor record of 8.44m to take the silver medal at the IAAF World Indoor Championships Birmingham 2018 and one month later won the Commonwealth title.

The South African won at five IAAF Diamond League meetings, including the final in Zurich. He also took the silver medal at the African Championships.

Voting for the Male World Athlete of the Year closes on 13 November. At the conclusion of the voting process, five men and five women finalists will be announced by the IAAF.