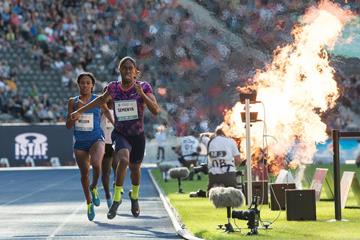 Twenty-year old Kyron McMaster of the British Virgin Islands produced the outstanding result of the meeting as he won the 400m hurdles in 47.80 – a national record that remained the fastest time run in 2017.

Jamaica’s Olympic 100m and 200m champion Elaine Thompson produced an impressive 200m victory on home soil in 22.09. That put her top of the early-season world lists in the longer sprint just a week after moving to the top of the 2017 times for the 100m following her 10.78 clocking at the IAAF Diamond League meeting in Shanghai.

Novlene Williams-Mills brought the home crowd to its feet with an emotional victory in the women’s 400m, clocking 50.54. The 35-year-old, who had operations for breast cancer in 2012 and 2013, had planned to retire at the end of the season.

“It feels good to come home and run a fantastic race one last time,” she said after her first win in the event in five years. “I think I’ve done enough for the past 10 years and it’s time to walk away.”

Sharika Nelvis won the 100m hurdles in 12.64 ahead of US compatriot Jasmin Stowers, who clocked 12.68. Jamaica’s world champion Danielle Williams was third in 12.78, equalling her season’s best.

In the men’s pole vault Olympic bronze medallist Sam Kendricks took his fifth outdoor victory this season in as many starts with a 5.80m clearance, adding 20 centimetres to the meeting record.

Liu set the tone for Chinese athletes who captured four events at the Todoroki Stadium, where more than 15,000 spectators had gathered.

Gwen Berry, the US record-holder, opened the IAAF Hammer Throw Challenge with victory in 74.13m. Britain’s Sophie Hitchon was next best with 73.97m.

The packed stadium of the Arena Caixa witnessed a superb display from Poland’s world and Olympic champion Anita Wlodarczyk, who began her IAAF Hammer Throw Challenge campaign with three throws beyond 75 metres, including a 78.00m winning effort. It extended the world record-holder’s winning run to 34.

"We are confident that my results will be consistent soon," said the Olympic champion.

Sifan Hassan gave her Dutch fans at the FBK Games a show by improving her own world lead as she won the 1500m in 3:56.14.

Maria Lasitskene also set a world-leading mark. The world high jump champion won the event with 1.94m before clearing 2.00m and a personal best of 2.04m.

Manyonga had jumps of 8.60m, 8.40m and 8.46m before his finishing flourish. It was the first time since 2009 that a long jumper had achieved two jumps of 8.60m or farther within the same series.

Bahrain’s Alsadik Mikhou clocked a personal best of 3:31.34 to win the men’s 1500m in a world-leading time.

The Ethiopian federation incorporated their trials for the World Championships within the FBK Games.

In the women’s 3000m steeplechase, 2012 Olympic silver medallist Sofia Assefa broke her own national record with 9:07.06.

The unheralded Samuel Tefera won the 1500m trial race in a personal best of 3:33.78, finishing 0.10 ahead of national record-holder Aman Wote.

Poland’s Pawel Fajdek raised the temperature on a damp day during the first IAAF World Challenge meeting to be held at the Paavo Nurmi Stadium.

The 55th Paavo Nurmi Games, held on the 120th birthday of the nine-time Olympic gold medallist, received a special gift from two-time world champion Fajdek as he produced the best hammer throw of the season, 82.40m, to the obvious approval of a near 12,000 crowd.

Turkey’s Ramil Guliyev also set a stadium record of 10.02 in the men’s 100m. And a third stadium record fell to Garfield Darien of France, who clocked 13.22 in the 110m hurdles.

A capacity crowd of more than 15,000 filled the Mestsky Stadium to mark Usain Bolt’s ninth and final appearance on the track – but on an evening of high emotion, the stand-out performer was Olympic 400m champion Wayde van Niekerk, who set a world best of 30.81 for the rarely-run 300m.

The South African’s effort surpassed not only Michael Johnson’s world mark of 30.85 from 2000 but also Bolt’s 30.97 meeting record.

“I’m just pleased and grateful for this big achievement,” said Van Niekerk, whose run came eight days after a 9.94 personal best in the 100m.

The meeting that had hosted Bolt most often in his career put on a farewell show for him which included a rendition of the Jamaican national anthem, celebratory music and fireworks.

Germany’s Olympic champion Thomas Rohler won with a 91.53m throw in the second round and followed up with 91.02m. Compatriot Johannes Vetter was second with 87.88m.

Anita Wlodarczyk earned her 37th successive hammer win with a 79.72m meeting record. On the men’s side, world champion Pawel Fajdek added more than a metre to his own world lead with an 83.44m effort – also a stadium record.

Isaac Makwala became the first man in history to run a 200m within 20 seconds and a 400m within 44 seconds on the same day, winning both events in the Moratalaz Stadium on an evening when temperatures were close to 40C.

“I’m satisfied, but I know I can run faster,” Makwala said in the 75-minute gap between events.

Cuba’s 18-year-old Maykel Masso won the long jump in a continental U20 record of 8.33m.

World and Olympic 800m champion Caster Semenya set a world best for the rarely-run 600m at the 76th edition of the ISTAF meeting in the Olympic Stadium.

The South African clocked 1:21.77 to improve the previous best of 1:22.63 set 20 years earlier by Cuba's Ana Fidelia Quirot. Semenya's performance was the 19th world record or best set at the ISTAF.

"I won my first world title here in Berlin, so this city is special for me," Semenya said.

Kenya’s Norah Tanui took nearly 18 seconds off the meeting record in winning the women’s 3000m steeplechase in 9:03.70. Germany's Gesa Krause, a faller in the World Championships final, bettered her own national record in second place with 9:11.85.

World pole vault champion Sam Kendricks extended his winning run to 12 with a best of 5.86m.

Local heroine Sandra Perkovic, who had won a second world discus title 16 days earlier, rose once again to the occasion in the Croatian capital with two throws beyond 70 metres.

Her fifth-round winning effort of 70.83m was the fourth best of her career, and she finished off with 70.44m.

The men’s 400m hurdles pitted the 20-year-old leader of the 2017 listings, Kyron McMaster, with 31-year-old Olympic champion Kerron Clement. But young Qatari Abderrahman Samba crashed the party with victory in 48.70.