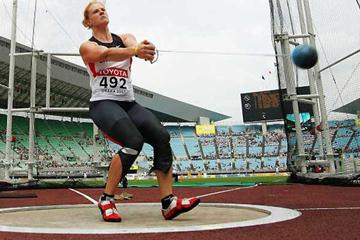 Already in her 1st attempt Heidler smashed the hammer out to 75.83m, the best performance of 2009 and a new University Games record. Martina Hrasnova responded in the 2nd attempt with 72.85 followed by Germany’s Kathrin Klaas with 70.97. In the following rounds no one could further improve these distances.

In the men’s events the best performance of the day came from junior Ramil Guliyev (AZE). The 19-year-old athlete improved his personnel best in the 200m final to 20.04. He missed the World Junior record of Usain Bolt by only 0.11 seconds. It also was a new European record.

The gold medal in 400m Hurdles went to Tirstan Thomas (AUS)  in 48.75, who missed his personnel best by 0.07 seconds. Second place went to Kazuaki Yoshida (JAP) in 49.78 followed by Belgium Michael Bultheel just 0.01 behind.

Jirina Placnikova of Czech Republic achieved 4.55 in her 1st attempt to win the women’s Pole Vault. Her remaining rivals Nicole Bucher (SUI) and Kristina Gadschiew (GER) used their remaining 2 attempts at 4.60 but both failed at that height.

In the men’s Javelin Throw only Latvian athlete, Ainars Kovals – Olympic silver medallist in Beijing – could break the 80m mark (81.58).

Like the men’s race, the women’s 20km race walk started at 7h30 in the morning on the course alongside the river Danube. It was Russian Olga Mikhailova who took the early lead. She managed to keep the speed and finished in 1.20.43 to break the World University record by 2 and a half minutes.

In the High Jump qualification rounds Ariane Friedrich was the only athlete who cleared 1.88 in her first jump of the day. All other athletes qualified already with 1.80 or 1.85.