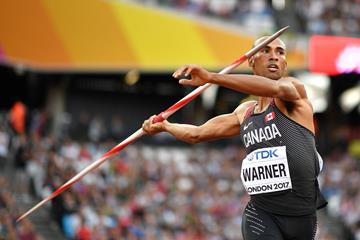 Athletics Canada has selected 49 athletes for the IAAF World Athletics Championships Doha 2019, which will be held from 27 September – 6 October.

“Having some veterans, along with rookies, is part of the tapestry of our sport; it bodes well,” said head coach Glenroy Gilbert. “When you look back at 2017, the performance as a whole was lacking for various reasons. We are looking for a better result this year, but the challenges will be there. In Doha, the challenges will be the heat and the time zone, but I think we’ve done a good job trying to mitigate those situations for our athletes. I’m expecting that our team will be prepared and ready to perform.

“In Doha, we could see a number of athletes on the podium or within striking distance,” added Gilbert. “Aaron Brown has shown he’s in good form in the 100m and 200m, as is Andre De Grasse. Alysha Newman is right up there, especially after her performance at the Diamond League meet in Paris, as is Brittany Crew and Gabriela DeBues-Stafford. Mohammed Ahmed is fit and has dropped some big performances, while the decathlon duo of Damian Warner and Pierce LePage is going to be exceptional. Not to mention our mixed 4x400m relay team that won medals at the IAAF World Relays, as well as the 4x400m women.”