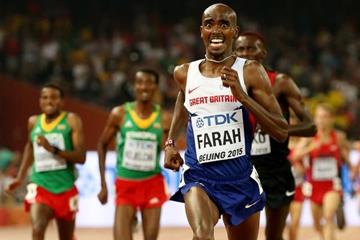 British Athletics has today announced a team of 78 athletes to compete at the IAAF World Championships London 2017 from 4-13 August.

World and Olympic 5000m and 10,000m champion Mo Farah headlines the team as he aims to defend both titles in the Olympic stadium next month. Farah, who has not been defeated in a 5000m or 10,000m race at a major championships since 2011, will be looking to pick up his fourth straight world title in the 5000m and third consecutive title over 10,000m.

Laura Muir will also be looking to achieve double success on the track in London. Muir qualified for the 1500m by winning the Diamond Trophy in that event last season. After recovering from a stress fracture in her foot earlier this year, the double European indoor champion has shown sufficient form and fitness to also claim a place in the 5000m.

Selected in both the heptathlon and high jump, Katarina Johnson-Thompson will be another looking for success in two events. The 24-year-old broke her heptathlon personal best in Gotzis in May and is the British record-holder in the high jump.

Despite currently suffering from an ankle ligament injury, world long jump champion Greg Rutherford has also been named in the squad. With little more than three weeks to go until the start of the championships, British Athletics is backing Rutherford in his race to be fit to compete in the stadium where he won Olympic gold in 2012.

“Obviously this isn't ideal,” said Rutherford. “But I am doing everything to give myself the best chance of success at the World Championships in London.”

Olympic hammer bronze medallist Sophie Hitchon secured her place on the team after winning a fourth successive British title and she will be joined by world finalist Nick Miller.

There is a welcome return to international action for Perri Shakes-Drayton in the 4x400m and Dina Asher-Smith in the 200m and 4x100m. Asher-Smith, who earned Olympic bronze in the 4x100m in 2016 and finished fifth in the 200m at the 2015 World Championships, returned to action earlier this month after suffering fractured a bone in her right foot in February. Shakes-Drayton last represented Great Britain at the 2013 World Championships, where she sustained a knee injury which has kept her out of international competition ever since.

“This feels bigger for us than Rio,” said British Athletics performance director Neil Black. “London 2017 is the major global sporting event this year and will be the biggest occasion the country has seen since 2012. We’ve selected some incredibly talented athletes, and in many events there have been some close calls. It’s now up to them to grasp this opportunity and produce performances that will make the whole nation proud.”

A second and final selection meeting will take place on 24 July, where any events with unfilled places will be discussed.