World record for Eaton, dramatic wins for Jeter and Harper in Eugene – US Olympic Trials, Day 2

Eugene, USAThere’s no place like home, and you could sense from Ashton Eaton’s intensity on the first day of the US Olympic Trials decathlon that, despite the uninviting wet conditions, the 24-year-old Eugene resident wanted to make a bold statement with his neighbors as eye-witnesses. His plan came to magnificent fruition on Saturday with a World record 9039 points* to eclipse the 11-year-old mark of 9026 by the Czech Republic’s Roman Šebrle. It marked the fourth time the event has seen a World record at Eugene’s Hayward Field.

After continually competing in the rain on the first day, Eaton deftly eluded some short rainstorms on Saturday, finding dry conditions for his section of the javelin, and then blazing to a win in the 1500m on his way to history.

(As usual the Decathlon and Heptathlon are part of the IAAF Combined Events Challenge, and full reports from those events will appear as separate articles - see 'Related Content' under main photo.)

With athletics’ longest event wrapping up on Saturday, the two shortest women’s races also came to a conclusion.

Dawn Harper earned the right to defend her Olympic title in London with a hard-fought win in the women’s 100m Hurdles. Running into the teeth of a 1.6 headwind, Harper came away from the start quickly and kept a narrow lead for the entire course as she clocked 12.73. Kellie Wells, the US year leader, was Harper’s constant pursuer and she finished in second with 12.77. Lolo Jones seemed to have a momentary hesitation at the start, but she recovered quickly and charged home in third place at 12.86, outdueling Ginnie Crawford (12.90) on the run-in.

Kristi Castlin, who had been near the top of the US performance list this season, was eliminated in the semifinals earlier on Saturday after a 12.93 performance. Queen Harrison, a member of the Beijing team, suffered the same fate with a 12.88 just ahead of Castlin in the same semifinal.

The women’s 100m contained drama which, at the time of this writing, is still on-going. Daegu World champion Carmelita Jeter sped away quickly and rode the 0.9 wind to a 10.92 with Tianna Madison and her Long Jump-runway style of sprinting claiming second in 10.96. Those results were quickly posted on the scoreboard. Then an eerie hush fell over Hayward Stadium as the spectators anxiously awaited the photo-read for the all-important third position.

After several minutes the decision came, with Janeba Tarmoh’s PB 11.068 appearing to earn a London spot ahead of Allyson Felix’s 11.069. The implications of this photo decision prompted a second look from both the inside and outside cameras, and after a half hour the result was modified to show a dead heat of 11.068 for both runners.

The matter was referred to US federation administrators, but as of late Saturday evening, no plan of resolution had been announced. What is clear is that both runners will be part of the relay pool in London.

Elimination rounds continued in other events.

The first round of the men’s 100m was an eagerly anticipated part of Saturday’s program, and Justin Gatlin showed the same determination that brought him the World indoor title just four months ago with a stunning 9.90 clocking. Tyson Gay also impressed with a 10.00 time even after shutting down over the last 15 metres. Other heat winners were Walter Dix (10.03), Michael Rodgers (10.05) and Marcus Rowland (10.16). The most significant sprinter eliminated was Mookie Salaam (10.62).

No surprises in 400m semis

The two 400m competition used a 'top 4’ advancement criterion with no provision for time qualifiers.

Tony McQuay led a tightly-packed group of five aspirants into the final straight and collected a win with a 44.84 clocking, just ahead of Josh Mance’s 44.99. Brady Gehret, a 20-year-old university student, was an unexpected surprise as he took advantage of his close position in the final stages and pushed hard for the third spot in an equal-PB 45.22, as David Verburg was right behind at 45.31. A notable casualty was Gil Roberts, running in lane 8, who faded badly on the run-in to finish seventh (and last) in 45.68.

Defending Olympic champion LaShawn Merritt had no real challenger in his 44.78 race in the second semifinal. Bryshon Nellum made a rush at the end to claim the runner-up spot in a PB 45.16, while Manteo Mitchell got the nod over former Olympic champion Jeremy Wariner as both were timed in 45.27. Torrin Lawrence (45.40) and Miles Smith (45.81) were among those exiting the competition.

Francena McCorory came away with the fastest time of the day in the women’s 400m semifinals as she clocked 50.55 after Natasha Hastings had set the pace for the first 200. Hastings held on for third in 51.28 behind Debbie Dunn’s strong close (50.99), as Jessica Beard took the last qualifying spot with 51.59.

The earlier race was easily controlled by Sanya Richards-Ross in 50.81 as Dee Dee Trotter followed her into the tape with 51.23. For the second straight day, a determined effort brought Diamond Dixon into the final with 51.58 as she edged out Keshia Baker (51.62). Beijing Olympic relay gold winner Mary Wineberg (51.94) and Athens relay member Moushaumi Robinson (52.48) were eliminated.

Robinson the quickest in 800m semis

The second semi, won by Mulder, saw the entire field coalesce with 250 left as the final sprint began. Winner Mulder broke loose from the pack immediately and crafted a significant advantage into the final straight, as Nick Symmonds, looking defensively from side to side, crossed next in 1:46.82. Ryan Martin (1:47.37) took the last automatic spot in that semifinal. Among those dropping out of contention was World Indoor finalist Michael Rutt (1:46.84).

Daegu fourth-placer Alysia Montaño had the fastest time in winning her semifinal section of the women’s 800m, employing as always her fast-opening front-running style. Hitting the 400 in 55.65 and with a three-second lead on the field, she barely fended off the fast-finishing veterans Alice Schmidt (2:00.50) and Maggie Vessey (2:01.01) who took the other automatic spots.

The earlier heat was a more traditional run-and-kick sort of race, as Molly Beckwith went to the front on the final back stretch and then held on for a narrow win, 2:00.57 to 2:00.58, over Geena Gall, as Phoebe Wright was third in 2:00.88.

Nelson fails to advance in the Shot Put

The men’s Shot Put, one of America’s stronger events in recent seasons, staged its qualifying round in heavy rain, making the spin technique problematic for some but not for all. Emerging with the best mark was Reese Hoffa at 21.22m, as Christian Cantwell joined him at 20.25m as the only other thrower to surpass the benchmark 20-metre level. Other notables staying alive were World Indoor champion Ryan Whiting (19.94m) and Cory Martin (19.17m), as well as NCAA champion Jordan Clarke (19.14). Jacob Thormaehlen (19.81) also made the grade.

The day saw only one 'name’ competitor not advance to the final, as Adam Nelson could only solve the wet conditions for 18.47m.

Daegu world champion Jesse Williams was among the leaders in the men’s High Jump qualifying which saw ten competitors clear 2.18m with an additional three at 2.15m. Along with Williams, Daegu competitor Erik Kynard, plus a pair of Athens Olympians, Tora Harris and Jamie Nieto, are among the finalists.

The entrants in the women’s Triple Jump will be competing in Monday’s final mostly for honour, as none of them has an A-standard and only one—Amanda Smock—possesses the B-norm. If no other jumper reaches the B-standard of 14.10m in the final, then Smock will have a spot on the team regardless of her placing.

As expected, Smock led the qualifying round with 13.80m, with Sheena Gordon following at 13.67m. Beijing Olympian Erica McLain, still on the comeback path after a severe training accident several years ago, advanced with 13.30m.

The qualifying round in the men’s javelin saw only one competitor reach the 80-metre level, as season US leader Tim Glover opened with 80.27m. Also advancing were the two other Americans over 80m for the year—Cyrus Hostetler (74.74m) and Corey White (73.63m) —plus Berlin finalist Sean Furey (76.00m) and NCAA runner-up Sam Humphreys (78.12m). 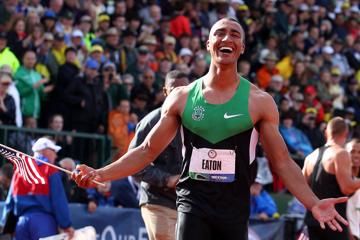