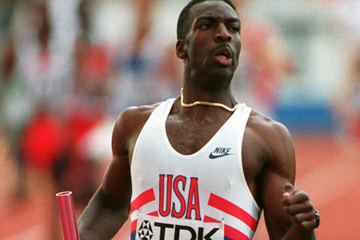 Is there any athletics follower who doesn’t enjoy a good 4x400m relay final?

The race often comes at the very end of the meeting, when all the hard work has been done and fans are feeling a little sad that everything has come to an end. It won’t be long before everyone packs up to go home, so it is the last chance to see something special on the track.

More often than not, magic is delivered.

The same will hopefully ring true at the IAAF/BTC World Relays, Bahamas 2015 in two weeks’ time, where both 4x400m finals will be held on the second day with the men’s event being the final one on the programme.

There is the prospect of the star of the meeting making an exciting encore. Alberto Juantorena did it in the 70s, Flo-Jo did it in the 80s, Michael Johnson did it in the 90s, Cathy Freeman did it in 2000 and even Usain Bolt did it as a junior.

Another special feature of the 4x400m are the runners who are able to reach a new level in the context of a relay. Chris Brown has been almost a second quicker in a relay than he has been from blocks, so it was heart-warming to see him claim an Olympic title along with the other Bahamian ‘Golden Knights’ at London 2012.

Then there are those spectacular moments when an athlete digs deeper than ever to help their team. One such example is the women’s 4x400m at the 1969 European Championships, when Lillian Board caught Collette Besson with the last movement of her final stride to take gold for Britain.

Forty-five years later at the same championships, Floria Guei ran a similarly miraculous anchor which this time won gold for France. Both races (1969, 2014) can be found on YouTube and the final result still seems unlikely every time you watch.

Two more relay legends are Herb McKenley at the 1952 Olympics and IAAF Council member Irena Szewinska at the 1974 European Championships. McKenley came from far back to enable a Jamaican defeat of the United States in Helsinki. Szewinska’s effort fell short of a medal for Poland in Rome, but it was clear she’d done something special. She was reliably timed at 48.5 for her leg when the individual world record stood (to her) at 49.9.

To make a crude comparison, that’s the equivalent to a woman clocking a sub-47-second relay leg in 2015. Hers was a performance ahead of its time, as was McKenley’s 44.6 from 63 years ago.

Whenever splits are revealed, it shows how and where races and records were won and lost; a list of four numbers per team which set the statistical seal on a week or so of track and field action.

A great deal of time has been spent requesting, tabulating and taking these times so that we can all see who did what as the race unfolded. Such work can take hours and days as one needs to identify the melee of runners massing at changeover times, then perform the arithmetic necessary to ensure the four numbers add up to an official finish time.

Apart from a handful of major championships, relay split times have only been available unofficially. It is, of course, quite tricky and expensive to time the first leg which starts on a 500m stagger line and finishes at the 800m start line in the same lane. One photo-finish camera can’t cover all eight finish points and there are often runners and officials obscuring the view.

Many is the time when, stopwatch in hand, statisticians have had to move almost as quickly as the runners in order to get a clear view of a particular changeover point. And of course they are timing the baton holder, so the split time rarely belongs to a single runner – unless the exchange is, improbably, made exactly at the mid-point of the changeover zone.

Split-taking cannot be a precise science and is the subject of debate. We still have to turn to estimated times, compare notes and make tweaks to achieve the best possible result.

The implementation of improved transponder and video timing systems – which will be in use at the IAAF World Relays next month – will hopefully mean that splits of the future are disclosed more quickly, perhaps even for the 4x100m and other relays including the new distance medley which will include one leg of 400m.

Even without such systems, we already have a pretty impressive list of history’s fastest one-lappers with baton in hand.