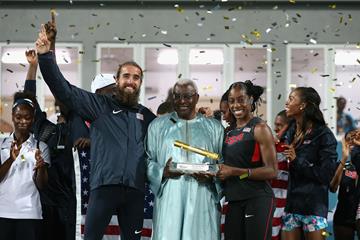 The IAAF World Relays has excelled beyond our expectations

“The IAAF’s faith in the innovative IAAF World Relays, a new event with a new presentation concept, and The Bahamas’ ability to deliver a top global sports entertainment product have been richly rewarded this weekend,” said IAAF President Lamine Diack.

"In the 'sun, sea and sand paradise' that The Bahamas markets itself, we have experienced a true sporting paradise which has excelled beyond our expectations. The people have embraced the IAAF World Relays and the noise of their support will be left ringing in our memories for many years to come.”

President Diack awarded The Golden Baton to captains Will Leer and Chanelle Price of the USA. The Golden Baton is awarded to the best overall team across all ten finals, with eight points scored for first, seven for second, and so on down to one point for eighth.

Kenya picked up an additional 15 points in the second day to finish third with 35. Their major point-winners came from world record performances in both men's and women's 4x1500m races, but an unexpected four points came from their men's 4x200m relay, which finished fifth.

In total, 29 teams scored points across the ten events.