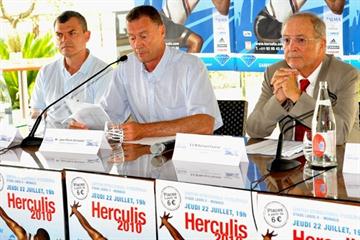 World leaders Lashinda Demus and Augustine Choge are the latest additions to a star-studded field for the Herculis 2010 - Samsung Diamond League in Monaco on 22 July.

Their names were among those announced today at a formal press conference held on the spectacular rooftop terrace, which overlooks Monaco bay, of the Hotel Fairmont, Monte-Carlo, which as usual will act as the meeting’s HQ later this month.

Bernard Fautrier, Vice-President of the Monegasque Athletics Federation, and Jean-Pierre Schoebel, the Meeting Director, were joined on the top table of today's press conference by Nick Davies, who is Deputy General Secretary and the Communications Director of the IAAF.

Many of the stars of this year’s Herculis meeting such as Samsung Diamond League Ambassadors Tyson Gay, Shelly-Ann Fraser, Barbora Spotakova and Valerie Vili had already been announced by the organisers but today’s conference brought another tranche of top names to the attention of the public, headed by two of this season’s standouts Lashinda Demus and Augustine Choge.

Demus, the reigning World 400m Hurdles silver medallist, has been on a tear this season, producing dominating victories in each of her four appearances - three in the Samsong Diamond League - in her speciality. At Rome's Golden Gala the 27-year-old powered to a 52.82 performance, the third sub-53 second performance of her career. Already the fifth fastest full lap hurdler in history, Demus has indicated that Kim Batten's 52.61 US record is in her sights this year, perhaps even Yuliya Pechonkina's 52.34 World record set in 2003.

"This year there are no World championships or Olympic Games," Demus said after her victory in Rome, "so I can properly work on improving my times." More recently, Demus dominated another strong field at Prefontaine Classic Samsung Diamond League meeting in Eugene, clocking a scintillating 53.03.

Choge, the reigning Commonwealth 5000m champion, currently sits atop the 1500m world list, courtesy of his tantalising victory over Olympic champion Asbel Kiprop in Shanghai. Choge clocked 3:32.20 at the Chinese Samsung Diamond League stop, a performance he nearly duplicated in 18 days later, where he won again in 3:32.21.

Given the recently recently renovated Monaco track and the traditionally ideal conditions at the Stade Louis II, it's reasonable to expect that both Demus and Choge can go significantly faster when the Samsung Diamond League stops in the Principality.

Click here for all news from the Samsung Diamond League