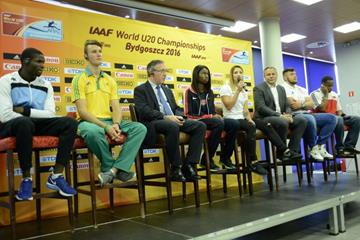 On the eve of the IAAF World U20 Championships Bydgoszcz 2016, some of the world’s top teenage athletes spoke at the pre-event press conference on Monday (18) about their aims for the week ahead.

IAAF General Secretary Jean Gracia opened the press conference by thanking the organisers for all their efforts in making these championships possible.

“On behalf of IAAF President Sebastian Coe, I’d like to thank the Polish Athletics Federation, its president Jerzy Skucha, the city of Bydgoszcz and its mayor Rafal Bruski for hosting these championships at such short notice,” said Gracia.

“By hosting this year’s edition, Bydgoszcz becomes the first city to twice host the World U20 Championships. With more than 1500 athletes entered, this is set to become the biggest ever athletics event in Poland.

“The World U20 Championships have historically been a stepping stone for promising athletes and have helped propel many athletes to greatness, including the likes of Usain Bolt and Valerie Adams.

“The combination of experienced hosts, an athletics-loving city, and the brightest host nation medal prospects leads me to believe that the IAAF World U20 Championships Bydgoszcz 2016 will be one of the best ever.”

Bydgoszcz Mayor Rafal Bruski was proud to be bringing another major sporting event to his city.

“This is the biggest sports event that has ever been hosted in Bydgoszcz,” he said. “I’m very proud of that, and the people in our community are very proud of that. It will be a great celebration for our city as well as for the athletes who will be competing here.

“This is the fifth time we’ll host a global athletics championships, so we have good experience and great memories. It will be sad to say farewell to all the competitors next week, but we wish that they’ll leave with great memories from Bydgoszcz, and that this will be the start of a great career for all of them, that we’ll see them at continental championships, world championships and Olympic Games.”

USA’s Candace Hill said that things are immeasurably different for her since winning the world U18 100m and 200m titles last year.

“Since last year, my life has completely changed,” she said. “I ran the 10.98 (in the 100m), the fastest ever by a high school girl. It got a lot of media attention and it was amazing. I won the two events at the World Youth Championships and now I'm now a professional athlete. So my life has really, really changed.

“The US Olympic Trials was an incredible experience, an experience a lot of people don't get to have and participate in. My biggest goal was to just to do my best. Just to run against girls and women who are world and Olympic champions was such a great experience.

“It would be an honour to bring the 100m title back to the US,” she added of her goals for this week. “We’re here to best represent our country. If I can do that, it would be great.”

Australia’s Kurtis Marschall will start as favourite for the men’s pole vault in Bydgoszcz this week and will then head to Rio to compete at the Olympic Games.

“Down in Australia, our summer is the opposite to Europe’s summer," he said. "Our season commences in December and I’ve been jumping since then. A little bit of tactics come into play because you have to peak twice.

“It’s an absolute privilege to don the green and gold and represent my country in Rio. We’ve had some amazing pole vaulters; Steve Hooker won the Olympic title in 2008 and Alana Boyd has been jumping well this year. Both of those are idols of mine. Ever since I started athletics at the age of seven, I’ve been dreaming about competing at the Olympics, so it’s an absolute honour.”

“This year I managed to participate at the World Indoor Championships and the European Championships and finished fourth in both,” he said. “In Amsterdam I lost (a medal) by just one centimetre so I was a little angry. I hope to unleash my anger here at these championships and get the top spot.

Fellow Pole Ewa Swoboda is another one of the host nation’s top medal hopes for this week.

“With the World U20 Championships being held in July, we’ve had a little bit of time to get in form and to attend some training camps,” said the sprinter. “I’ve trained really hard and I hope everything will go fine.

“The other girls (Candace Hill and Khalifa St Fort) are really strong. They run really fast. I hope my times can improve and that I can get on the podium. Maybe we’ll beat our personal bests because you can run really fast in Bydgoszcz.”

“I like Kirani James, the way that he runs,” he added of his idol. “I keep looking and studying his video.”

IAAF Ambassador Ato Boldon recalled his experiences of the IAAF World U20 Championships in Seoul 24 years ago when he won the 100m and 200m titles.

“I remember walking into the stadium and thinking, ‘this is where the Olympics were held just four years prior’,” said Boldon. “I think all young athletes here are on a similar path already.

“When you come to a World U20 Championships and do great things, it confirms to you that this is the path you should be on.”

Bob Ramsak and Jon Mulkeen for the IAAF