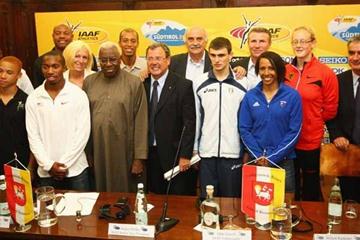 Heading the second part of the press conference was IAAF Senior Vice President Sergey Bubka who was also a special guest of yesterday’s IAAF Masterclass.

The Pole Vault World record holder Bubka declared: “I didn’t have such a high level of competition in my youth; this competition is one of the most important for the IAAF as it gives the chance to our youngest athletes to make their first step at the international level.

About the Masterclass, Bubka said: “We had the opportunity to discuss with the younger talent and give them the value of our experience of what they will have to go through when they start competing at a higher level. It was a wonderful thing to be able to meet and talk to these youngsters.”

World Indoor High Jump record holder Kajsa Bergqvist shared tips with the reigning World Junior champion Kimberly Jess of Germany who is still eligible to compete in the World Youth Championships but has unfortunately been hampered by an ankle injury since May.

Jess who declared her aim will be “to reach the final because I have been injured” is on course to reproduce Triple Olympic champion Usain Bolt’s exploit as he won the World Junior Championships in 2002 aged 15 only to come back and conquer the World Youth title a year later in Sherbrooke 2003.

“My idol is Kajsa,” Jess explained. “So to have had the chance to meet her and talk to her yesterday is great. She told me how not to get too nervous and handle the pressure.”

Double Olympic champion Kelly Holmes who was in Bressanone as an IAAF Ambassador had also personal interests in the IAAF World Youth Championships as two of “her” girls will be competing here namely Rowena Cole and Louise Small.  Holmes founded the “On Camp with Kelly” programme to help young British athletes throughout their athletics career and has now 46 girls and 11 boys part of her programme.

A regular participant in the IAAF Masterclass, World Indoor and Outdoor record holder Wilson Kipketer who is now also acting as a coach in the IAAF Development programme advised the youngsters to “listen and learn. And to work hard and be dedicated in achieving your best. Athletics is an individual sport but you also have to listen to your coach. It’s one plus one, you and your coach.”

World Long Jump record holder Mike Powell recounted how he, himself drew inspiration from the previous generation. “To be able to meet the likes of Edwin Moses and Daley Thompson when I was a young up and coming athlete and to be able to touch them and see that they were human just like me and you inspired me to believe in myself and believe that I could also achieve great things in the sport.”

European 400m Hurdles record holder Stéphane Diagana encouraged the younger generation to have the best time of their life and enjoy their passion. “I believe our passion is our strongest talent. Raw talent is not enough; if you have passion you have what it takes. To work 18 years of your life to be on the top of the podium just one day in your life you cannot achieve it without passion.”

Three sprinters who will line up in tomorrow’s 100m heats also attended the press conference. 17-year-old US Youth champion PJ Hardy who ran a wind assisted 10.08 said: “Tyson Gay inspires me, I get a rush of adrenaline when I watch him compete; when he got hurt at the US Olympic Trials, I felt hurt too. It was great the way he came back to start competing at the Olympics, He didn’t win but he put everything into it.

Jamaica’s Adam Cummings who was a runner-up at the Jamaican Youth Trials and part of the Class II winning 4x100m relay team at the Boys and Girls Championships declared: “People I respect? I respect Jamaican athletes who from such a small country can go out and do such great things.”

Representing the Italian team, Matteo Didioni, the 100m national champion who was born and raised in Bressanone/Brixen said: “the people of my city have put great efforts in organising this competition. My coach was so involved he didn’t even have time to coach me!”