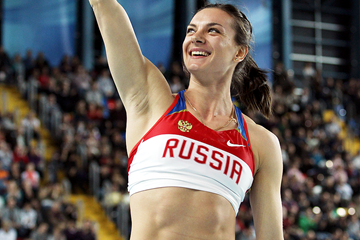 When Yelena Isinbayeva makes her return to action in February, more than 900 days will have passed since her last competition.

A lot has happened during that time, of course. After the 2013 IAAF World Championships in Moscow, having won her ninth senior global title, Isinbayeva took a break from pole vaulting and gave birth to her daughter Eva in June 2014.

She delayed her return to training for another six months so that she and her husband, javelin thrower Nikita Petinov, could spend time with Eva. Isinbayeva resumed basic training in January earlier this year and her form has steadily progressed.

At the end of August, she posted videos of her training sessions on her Instagram account, clearing 4.30m off an eight-step approach and 4.50m off 10 steps.

“We continue to work on the technique of the jump,” she said at the time. “Everything is under control.”

Earlier this month, she took a break from training for one day when her foundation organised a colourful charity 5km race in which participants get showered with powdered paint as they run around the course. The event was held with the support of Athletics for a Better World, the IAAF’s social responsibility programme.

“By the end, we all looked like the characters from Avatar,” joked Isinbayeva. “I jogged around near the back; I had to run slow because I had a vaulting session planned for the following day.”

The world record-holder also outlined her tentative competition plans for 2016, her final year of competition before retiring from the sport.

“It all depends on how I feel so I haven’t promised 100% but the plan is to start the season at the Governor Cup in Volgograd on 6 February,” she said. “The Russian Winter meeting in Moscow on 14 February would be next in our plan.

“And it’s not only the Olympic Games; I’m also dreaming about another world record. After experiencing that feeling several times in the past, you want to do it again. That would be one of the emotional highlights of my career.”

Jon Mulkeen and RusAthletics.com for the IAAF