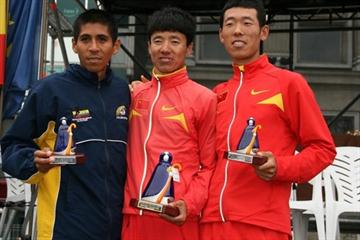 While the 21-year-old Chinese retained his title from last year with a 1:21:11 clocking, the Spaniard Pascual managed her first ever victory at an IAAF World Challenge permit meeting thanks to a 1:28:05 performance. Coming slightly over one month ahead of the European championships the 28-year-old Barcelona-born walker propels herself into the medal picture.

Over the 1km-long flat circuit, the men’s contest opened quite conservatively as the large lead pack cruised the 5000m point in 20:34 headed by the Chinese pair of Zhu and newly-minted World Cup winner Hao Wang while the rest of favourites walked tucked behind, the Australian duo of reigning Olympic bronze medallist Jared Tallent and Luke Adams plus Mexico’s Eder Sánchez among others.

They all reached the halfway point in 40:54 and there were not major changes until the closing 5k when Zhu and the current World silver medallist Hao broke away from the rest with only Colombia’s Luis Fernando López, who was a creditable fifth at last month’s World Cup in Chihuahua, for company.

Entering the closing 1000, it seemed unavoidable a thrilling sprint for the victory and it was finally the case. To balance even more their winning chances, the strongest man on paper Hao had already received two warnings while Zhu and Lopez had only be warned once.

For the delight of the knowledgeable La Coruña crowd the three top walkers fought fiercely through the finish line and it was Zhu who proved to be fastest in 1:21:11 and a one-second advantage on runner-up Lopez, himself another second clear of Hao.??

Sanchez, the 2009 World Cup bronze medallist and arguably holder of the best technique in the field, had to be satisfied with fourth place not too far away from the podium places as he was timed at 1:21:16.??

Zhu – a gifted prodigy who clocked 1:18:44 for the distance at the age of 17 – declared, “Today was a fantastic and tough win. I’m just competing at several events across Europe but my primary goal for this year are the Asian Games to be held in November in Guangzhou (China).”

“Before that,” he continued, “I’ll also take part at the IAAF World Challenge final in Beijing next 19 September. My compatriots and I are already accustomed to Europe customs, food, etcetera, as we have spent a lot of time this year here.” After his win in Krakow on 29 May, where he clocked a 38:40 PB over 10 Km, Zhu and his colleagues travelled to Italy for a training stint with former World and Olympic champion, Maurizio Damilano.

In contrast to men’s event, the women’s race opened at a brisk pace with a 5000m split of 22:14 for a quintet comprising the Portuguese triumvirate of Vera Santos, Ines Henriques and Ana Cabecinha, Ireland’s reigning World silver medallist Olive Loughnane and Spain’s Beatriz Pascual.

The Spaniard, who was a disappointing 11th in Chihuahua in 1:36:08, proved to be determined to take revenge on that below-par performance and by the halfway point she walked alone at the forefront in 44:09, with a seven-second margin on this year’s World Cup leader Santos. By then, Loughnane travelled in fourth some 37 seconds in arrears.

Throughout the second half Pascual maintained her dominance while a fading Santos was comfortably overtaken by Loughnane with six kilometres to go. At the finish line, Pascual clocked her second fastest time of 1:28:05 only bettered by the 1:27:44 which led her to the 6th place at the Beijing Olympics. The Irish star came second 31 seconds behind but 20 seconds clear of Santos.

It’s also worth mentioning the fifth place managed by Spain’s Julia Takacs (1:30:14, a National U-23 record) and the seventh place of Britain’s Johanna Jackson 1:30.41, a new national record.

“My 2010 season was going too well and so this win is a huge moral booster thinking of next month’s Europeans in my hometown of Barcelona,” Pascual said. “I suffered a knee injury last November and could only resume full training in March. My two-week training camp in Font Romeu just ahead of today’s event has proved to be positive so I plan now to return there for another two weeks.”

Pasqual plans to compete just once more before the European Championships. “I’ll only compete at the Spanish Championships in Avilés where I’ll contest 10km on the track as a test.”