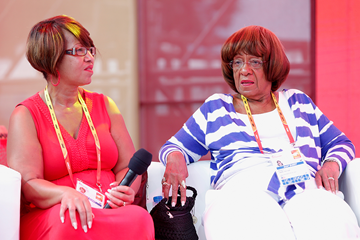 Olympic hero Jesse Owens is being represented by Beverly Owens Prather, his middle daughter, and Donna Prather Williams, his granddaughter, who are currently attending the IAAF World Championships, Beijing 2015.

Ms Prather will present the gold medal during the men’s 4x100m victory ceremony on Sunday 30 August.

The Owens family members’ visit will also commemorate the signing of an agreement between the Jesse Owens Foundation and the IAAF’s Social Responsibility programme, Athletics for a Better World. The programme will be making a donation to the Foundation.

The legendary athletics superstar’s story is told for the first time in a feature film in Race, to be released in the US by Focus Features on 8 April 2016.

Jesse Owens’ quest to become the greatest track and field athlete in history thrusts him on to the world stage of the 1936 Olympics, where he faces off against Adolf Hitler’s vision of Aryan supremacy. Race is an enthralling film about courage, determination, tolerance, and friendship, and an inspiring drama about one man’s fight to become an Olympic legend.