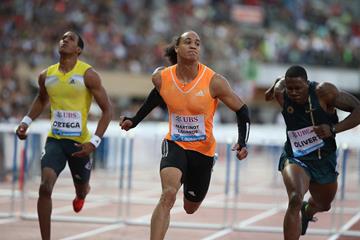 There are four more meetings left in the 2014 IAAF Diamond League series, but six athletes have dominated their disciplines to the extent that they have already done enough to win the Diamond Race.

To seal their victory – and the USD $50,000 bonus and Diamond Trophy to go with it – they simply need to compete in their discipline at either of the IAAF Diamond League finals in Zurich and Brussels.

The other 26 events in the Diamond Race remain undecided. Four of them are extremely close, however, with just two athletes left in the running. US triple jumpers Will Claye and Christian Taylor are currently separated by just two points. Piotr Malachowski and Robert Harting are the only remaining athletes in with a chance to win the Diamond Race in the men’s discus.

And while 800m runner Eunice Sum and discus thrower Sandra Perkovic have a healthy lead in their events, it is conceivable that they could be caught by USA’s Ajee Wilson and Gia Lewis-Smallwood, respectively. If Perkovic wins in Stockholm or Sum wins in Birmingham though, they will be uncatchable in the Diamond Race.

The races in the other disciplines are wide open. In 20 of them, there are five or more contenders still left in with a chance of winning the Diamond Race, and in 16 events the Diamond Race winner will only be decided in one of the finals in Zurich or Brussels.

A full update of the Diamond Race can be downloaded as a PDF from the related documents section on the right-hand side of this page.