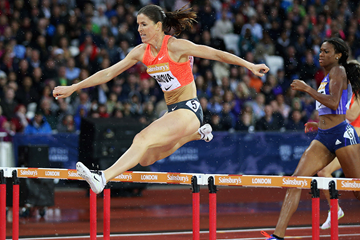 The season-long marathon is nearly over; it is time for the sprint on the home straight.

In London and Stockholm, the last few points were gathered before September's IAAF Diamond League finals, and the scene is set for an exhilarating climax to the 2015 season. Events in the past week have provided proof that, in the Diamond Race, anything can happen.

Take Anaso Jobodwana, for example. After briefly losing his Diamond Race lead to Zharnel Hughes in London, the South African's second-place finish in Stockholm means that he once again tops the table in the men's 200m Diamond Race, despite not having won a single race in the IAAF Diamond League this year. In five out of six meetings, though, Jobodwana has finished in the top three. Top spot is a fitting reward for his consistency.

Piotr Malachowski, too, knows the value of consistent performance. Having struggled to shake off Robert Urbanek despite repeated victories, Malachowski finally put daylight between himself and his compatriot with a win in Stockholm. He now leads the men's discus Diamond Race on 17 points to Urbanek's 11.

Stockholm also saw Greg Rutherford finally establish a lead which should see him take his first Diamond Trophy. By far the stand-out performer in the men's long jump Diamond Race this season, Rutherford's defeat in London meant that his lead remained achingly slender. The Brit came back fighting in Sweden, though, to claim victory and a five-point advantage at the top of the table.

Five points is also the lead held by Mutaz Essa Barshim in the men's high jump Diamond Race, though Barshim will be less content than Rutherford with that advantage. The Diamond Trophy holder has failed to fully impose himself on this year's Diamond Race, and it is only by virtue of the fact that Marco Fassinotti and Jacorian Duffield shared the victories in London and Stockholm that he remains so clearly ahead.

Shelly-Ann Fraser-Pryce and Nikoleta Kyriakopoulou, meanwhile, extended their leads with victories in Stockholm and London respectively. Fraser-Pryce leads the women's 100m table by four points, while Kyriakopoulou has held off main rival Fabiana Murer in the women's pole vault to grasp a six-point lead.

In the women's javelin, three-time Diamond Race winner Barbara Spotáková, who is looking this season to successfully defend the Diamond Trophy for the first time, made up for a slow start with victories in Paris and Stockholm. Her second place in London means she holds a four-point lead going into the final.

Even that seems a big lead when compared to Ayanleh Souleiman, who is now just one point clear of Silas Kiplagat and two of Asbel Kiprop in the men's 1500m. Souleiman will nonetheless be happy with his position, having overtaken the two Kenyans for the first time this season with a win in Stockholm.

The 1500m is one of three Diamond Races in which four men could still claim the overall victory, alongside the 100m and the 110m hurdles. The latter has seen a late comeback from Orlando Ortega, with the Cuban wrapping up four points in Stockholm and closing in on leader David Oliver.

With 27 of the 32 Diamond Races still to be decided going into the finals, there are only a handful of athletes who have managed to fully dominate their fields this season. Caterine Ibargüen (women's triple jump), Tianna Bartoletta (women's long jump), Eunice Sum (women's 800m), Christina Schwanitz (women's shot put) and Sandra Perkovic (women's discus) have all refused to falter this year, and need only turn up to the finals to claim the Diamond Trophy.

Their achievement is even greater considering how fragile even the largest of leads can be in the Diamond Race. Kaliese Spencer and Kirani James, for example, have seen their early season dominance evaporate into thin air over the past two meetings.

James' lead was shortened to just two points after Wayde van Niekerk's victory in the 400m in London, while Spencer had led the women's 400m hurdles Diamond Race by ten points at the start of July. That was before Zuzana Hejnová stormed to three consecutive victories. The Czech is now two points ahead at the top of the table.

Those turnarounds are testament to the unpredictability of the Diamond Race. Few narratives have run as expected this year, and as the finals loom, there is a whole host of Diamond Race stories which are yet to reach their climax.