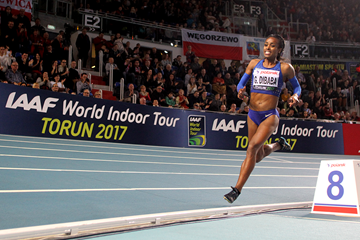 The IAAF has reached a new agreement with ESPN Media Distribution and the European Broadcasting Union (EBU) for the sale and distribution of media rights for selected events in the IAAF World Indoor Tour (WIT) from 2018 to 2023.

Together, ESPN and the EBU will represent the global media rights (excluding each event’s host territory) to IAAF WIT events in Karslruhe, Dusseldorf and Torun, all of which are held in February 2018. Rights for the Muller Indoor Grand Prix Glasgow are also included in the agreement from 2019.

The news follows the announcement in August that together, ESPN Media Distribution and the EBU will represent the media rights to IAAF events across Europe and Africa including the next three IAAF World Championships and IAAF World Indoor Championships and more than a dozen other competitions in the IAAF World Athletics Series.

ESPN and the EBU bring a unique, combined ability to maximise the profile of athletics and increase access to the sport’s top global competitions to hundreds of millions of fans across the two continents via a combination of free-to-air television, pay television and digital media platforms.

Adding World Indoor Tour events to the suite of rights already represented by ESPN and the EBU means that the two organisations can provide broadcasters and media companies with access to the most exciting, relevant and pertinent content in the lead-up to the IAAF World Indoor Championships Birmingham 2018 which takes place next March in the UK.

The EBU and ESPN will work together to represent the media rights in Europe and the rest of the world, across free-to-air, pay and digital media.

IAAF CEO Olivier Gers said: “Athletics has had a phenomenal year with World Championship events in Uganda, Kenya and of course the spectacular IAAF World Championships in London this summer which was viewed in more than 200 territories around the world. Bringing our sport in to the homes and hands of our growing fan base underpins the media rights deals we are pursuing. ESPN and the EBU have both the experience and the creativity to deliver this ambition.”

Charly Classen, Vice President and General Manager, ESPN EMEA, said: “We are delighted to extend our partnership with the IAAF and the EBU. These events in the World Indoor Tour are a great addition to the deal, and an excellent way for us to build on the solid foundations that began with the agreement we announced in August.”

Director of EBU Sport Stefan Kürten said: “The World Indoor Tour Athletics is an exciting addition to our existing agreement with IAAF and ESPN. Athletics is enjoying incredible success across Europe at the moment with viewers able to enjoy more than 2,300 hours of action from this year's IAAF World Championships across our territories. We look forward to building on our partnership to bring the indoor events to both new and traditional athletics fans."

The International Association of Athletics Federations (IAAF) is the world governing and rule making body for the sports of athletics, which encompasses track and field, race walking, road, cross country, mountain, trail and ultra-running.

In 2012, the IAAF celebrated its centenary. Today boasting 214 national Member Federations, it has a global reach greater than that of the United Nations.

The IAAF World Athletics Series (WAS) is a global series of Athletics competitions. It is topped by the biennial IAAF World Championships which was created in 1983, whose ten days of competition involve 2000 athletes from more than 200 countries, 3000 media, 700,000 stadium spectators and are broadcast to over 200 territories worldwide to an accumulated global audience of 6 billion. The IAAF World Championships London 2017 will be followed by editions in Doha (2019) and Eugene (2021).

The World Indoor Tour is an annual premier tour of six indoor meets across Europe and North America, which culminates every two years in the World Indoor Championships. The next editions are taking place in Birmingham (2018) and Nanjing (2020).

About The European Broadcasting Union (EBU)

The European Broadcasting Union (EBU) is the world’s foremost alliance of public service media (PSM). Our mission is to make PSM indispensable. We have 73 Members in 56 countries in Europe, and an additional 33 Associates in Asia, Africa, Australasia and the Americas.

Our Members operate almost 2,000 television, radio and online channels and services and offer a wealth of content across other platforms. Together, they reach audiences of more than one billion people around the world, broadcasting in more than 120 languages.

Our member services strive to secure a sustainable future for public service media, provide our Members with a centre for learning and sharing and build on our founding ethos of solidarity and co-operation to provide an exchange of world-class news, sports news and music. While our business arm, Eurovision Media Services, has an outstanding global reputation and is the first choice media services provider for many media organizations and sports federations around the world.

EBU Sport works with 28 international sports federations and handles more than 30 contracts every year. This represents around 200 events including over 700 competition days which Eurovision Media Services often produce and distribute.

Across Europe, the Middle East and Africa ESPN is a leading multimedia sports brand, with digital media and sports content distribution businesses, as well as key long-term multimedia collaborations.

Long-term, multimedia agreements in the region include a ground-breaking long-term multimedia collaboration with Econet Media’s Kwesé television and streaming platform in sub-Saharan Africa and a long-term collaboration with BT Sport in the UK and Ireland that includes an ESPN-branded channel as part of the BT Sport television business. ESPN Media Distribution represents an extensive portfolio of rights-owned content including live sports, studio programming and films to broadcasters around the world, through dedicated media distribution teams in locations around the world. Across EMEA, ESPN also operates the live and on-demand streaming service ESPN Player that reaches more than 50 countries. ESPN is the #1 digital sports brand worldwide, with an unmatched collection of sports websites and apps including 11 local editions around the world (including ESPN.co.uk and KweseESPN.com in sub-Sahran Africa), as well as leading sport-specific digital platforms ESPNcricinfo (cricket) and ESPN FC (soccer). ESPN digital products and content reach hundreds of millions of fans each month, who spend billions of minutes and log nearly a half billion video views.