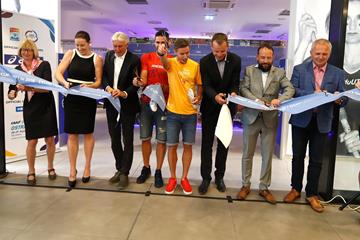 The IAAF Heritage World / Continental Cup - 1977 To 2018 - Exhibition opened in Ostrava, Czech Republic, to applause and accolades from the dignitaries and public gathered in the Czech city’s Forum Nova Karolina Shopping Centre on Tuesday (5).

The two-part exhibition of 200 items, covering both ancient and contemporary aspects of the sport, will be open seven days a week from 1000-2000 at the venue in the centre of Ostrava.

It will run until the final day of the IAAF Continental Cup Ostrava 2018 on 9 September.

She referred to the annual IAAF World Challenge meeting in the city and the fact that in recent years Ostrava successfully staged the IAAF World U18 Championships in 2007 and European U23 Championship in 2011.

“With the IAAF Continental Cup Ostrava 2018 on the horizon, I can’t think of a more appropriate place for IAAF Heritage to open its first international exhibition.

“I think it’s important to note that this exhibition is happening in a shopping centre, not a stadium or museum,” she added. "I hope it will reach a lot of people this way and it’s indicative of how much Ostrava supports this exhibition and is determined to promote the IAAF Continental Cup."

Combining the best of the IAAF Heritage Collection, which was launched at the IAAF World Indoor Championships Birmingham 2018 two months ago, with artefacts and memorabilia from every edition of the IAAF World and Continental Cup, the exhibition provided engrossing viewing for the crowds who made their way inside the venue following the official cutting of the tape by the eight dignitaries present.

Barlag was joined by Australia’s Jana Pittman, an IAAF Athlete Ambassador and two-time world 400m hurdles champion, the Mayor of the City of Ostrava Tomas Macura and the Deputy Governor of Moravia-Silesia Stanislav Folwarczny.

Two of the Patrons of the IAAF Continental Cup Ostrava 2018, the three-time world indoor 400m champion Pavel Maslak and the European pole vault silver medallist Jan Kudlicka, were on hand at the opening and, like Pittman and Janku, donated memorabilia from their careers to the exhibition.

“I’m very pleased to be involved in this project, especially as one of the purposes of the exhibit is to engage young people with the sport of athletics and this exhibition is accessible to everyone,” said Pittman.

Her comments were endorsed by the Mayor of the City of Ostrava Tomas Macura, who said: “Ostrava is trying to support the local youth and one way is with our involvement with this exhibition and the IAAF Continental Cup.”

The first section of the exhibition is entitled 'Athletics from ancient times to the end of the 19th century' and has artefacts from as early as the 5th century BC up until the end of the 1890s.

This part of the exhibition traces the origins and development of athletics through its 2400 years.

The items – which include coins, medals, programmes, books and periodicals – were loaned to the IAAF by the South American Area Association CONSUDATLE, the oldest IAAF area association which is celebrating the centenary of its foundation in 2018 by providing 100 items to mark its 100 years.

The second section of the exhibition focuses on the IAAF World Cup, which was inaugurated in 1977, and its successor the Continental Cup, which was founded in 2010 and is now contested every four years.

Among the items on display here are programmes, posters, books, competition bibs and kit as well as one the two original IAAF World Cup trophies.

The exhibits in the second section have come from the IAAF archives as well as via personal donations by athletes, including all the IAAF Continental Cup Ostrava 2018 Ambassadors and Patrons.