Indoor athletics was put under the microscope like never before at last year’s IAAF World Indoor Championships in Birmingham, where 28 high speed cameras recorded all the action as part of the most extensive biomechanics study ever conducted at these championships.

Today, the IAAF, in partnership with Leeds Beckett University, has released the results of the ambitious project, which examined the performances of 161 athletes across 13 events in forensic detail.

After 12 months of intensive analysis, Leeds Beckett has produced 13 in-depth reports on specific events from the World Indoor Championships, revealing a raft of new information about the performances of the world’s best athletes.

This study follows on from the initial, larger project conducted during the IAAF World Championships London 2017. The 38 reports produced as a result of the London study were published on the IAAF website last July, and have now been downloaded more than 12,700 times to underscore the demand for this data within the sport.

For the Birmingham study, the Leeds Beckett team of 25 academics, technical staff and students spent more than 1500 hours capturing and analysing more than 650 video files.

Lead researcher Dr Athanassios Bissas, Head of Biomechanics at the Carnegie School of Sport, Leeds Beckett University, said the London study had been exceptionally well-received around the world and he expected this study would have similar resonance with the athletics community.

“We have again deployed three-dimensional motion techniques to analyse key events, building upon what we learned in London 2017," Dr Bissas said. “We have refined these techniques and the data captured illustrates what we can learn when science is applied. It is fascinating and remarkable at the same time. We believe our findings will again excite the athletics community.

“We saw our 38 reports from the London championships being downloaded in 204 countries around the world. They provided great interest, debate and knowledge which has informed athletes, coaches and spectators that the application of science is pivotal when capturing data at such events.

“We are extremely thankful to the IAAF for providing us with this great opportunity to work together and we look forward to strengthening our relationship and making biomechanics even more visible through the IAAF’s championships and programmes.”

Some of the highlights of the research include:

• First project to capture in detail the first 10m of the 60m finals, which revealed that five of the six medals were decided within the first ten metres (which accounts for almost 30 percent of the total time). Only Marie-Josée Ta Lou claimed a medal (silver) after being outside the top three at the ten-metre mark.

• Measurements of the sprinters’ exit times from the starting blocks revealed that the average time was identical for male and female sprinters (0.5 seconds).

• Advanced analysis of the approach phase during the pole vault competitions.

“These biomechanics studies have given us all a fresh and fascinating insight into the extraordinary performances of our athletes, and reflect the IAAF’s drive towards innovation and technology that can help us to showcase athletics in new and exciting ways for all our followers. I’m sure coaches the world over will be examining these reports closely for knowledge they can use to enhance their training programmes and develop their athletes.

“I commend the IAAF Development Department and the team at Leeds Beckett University for their exceptional work in producing both the Birmingham 2018 and London 2017 reports, which have contributed significantly to our understanding of high performance.” 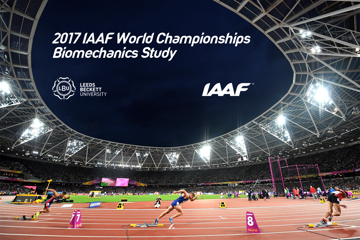