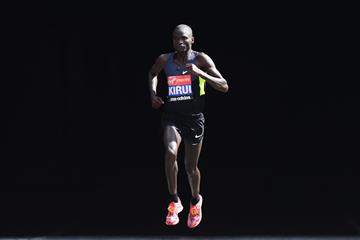 Abel Kirui will use the TCS Amsterdam Marathon, an IAAF Gold Label Road Race on Sunday (19), as a springboard towards attempting to win a third world title next year in Beijing.

“That is my dream for Sunday,” he said at a press conference in the world famous Amsterdam Concertgebouw. His second goal is to break the 2:05 barrier.

Kirui is one of the eight contenders in the men’s field with a PB faster than 2:07. He is undoubtedly the best known athlete in the field worldwide, having won two world titles and an Olympic silver medal.

But in the Dutch capital, the spectators may be more familiar with another Kenyan runner. Wilson Chebet is known as “Mister Amsterdam”, having won the past three editions of the race. He has broken the course record in his past two appearances, reducing it to 2:05:36 in 2013, just nine seconds shy of the PB he set in 2011 in another famous Dutch marathon, in Rotterdam.

“2013 was a frustrating year for me,” said Kirui, who was unable to defend his world title in Moscow. “Because of a stress fracture, I could train well but couldn’t run a marathon.”

That’s the reason why he had to wait until February this year to race his first marathon since the London 2012 Olympics. At the Tokyo Marathon in February, he finished 10th in 2:09:04.

“For Amsterdam, my preparation has been much better,” said the 32-year-old. “The energy is back and I’m very positive about my training. I’m free of injuries and because of that I’m happy again. Running is where my heart and focus are.”

Medals are more important than records for Kirui. “Of course, the world record is great, but you can lose it one week or one month later,” he said. “A title and a medal you will keep for ever and people will remember me because of these titles.”

Does he think that he could break the world record?

“Not this weekend in Amsterdam, but I think that I’m capable of doing it, if I can do something special in the second half of a race,” he said. “You need very good preparation and a lot of focus over a long period of time. For the world record, you not only need good pacemakers in the race itself, but also in training.

“And you need good cooperation for a long part of the marathon,” he added. “Here in Amsterdam, Chebet will show us the way. He’s been here so often. But in the end we will battle it out and see who is the best.”

This will be Chebet’s fifth marathon in Amsterdam, having started his career here in 2010 with a 2:06:12 clocking to finish second. “I still haven’t run faster than 2:05,” said the 29-year-old. “That’s still a big challenge. But this time I brought my wife and my two-year-old daughter with me. We will do this as a team and hopefully this will bring me a personal best.”

The fastest man on the start-list, however, is 23-year-old Ayele Abshero. In 2012, the Ethiopian ran 2:04:23 in his first ever marathon, making him the second-fastest debutant in history behind world record-holder Dennis Kimetto, whose debut was just seven seconds quicker than Abshero’s.

Abshero finished third at the 2013 London Marathon in 2:06:57 and was fourth in this year’s race in 2:06:31. “Now it’s time for a 2:03 PB,” said Abshero. “I have been training very well and did more kilometres at a higher speed. But the last couple of weeks I had some minor problems with my calf and I’m not very happy about that, so now a time of 2:04 and a course record are my goals for Sunday.”

Not since 1981 has there been a two-time winner of the women’s race in Amsterdam, but Ethiopia’s Meseret Hailu is looking to end that drought.

The Ethiopian won in Amsterdam two years ago in a PB of 2:21:09, breaking the course record and making her the fastest in the field for this year’s race.

“The 2013 season was full of injuries and that’s the reason why I didn’t improve,” said Hailu, who finished second in Boston last year in 2:26:58 and was fourth in Dubai earlier this year in 2:26:20. “But I’m very happy to be back in Amsterdam.”

She will be up against compatriot Betelhem Moges, who made her marathon debut in Dubai this year when finishing just one place behind Hailu in 2:26:42. Since then, she has improved her half-marathon PB to 1:09:23.

Burundian record-holder Diane Nukuri-Johnson is also in the field and will be looking to make it on to the podium for the first time in a marathon. The 29-year-old has a PB of 2:29:54, set last year in Boston.

At about 20⁰C, the weather is expected to be warm for the 39th edition of the Amsterdam Marathon. A record number of 16,000 runners will start the marathon with a further 28,000 runners from 93 countries set to compete over shorter distances.