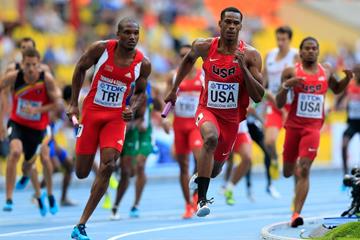 Another bout of the USA vs The Bahamas rivalry with possible interference from Trinidad and Tobago and the Belgian Tornados – that is the forecast for the 4x400m final in Beijing.

Ever since ‘Golden Knights’ Chris Brown, Michael Mathieu, Ramon Miller and Demetrius Pinder defeated the USA at the London 2012 Olympics, the battle between the two teams has been fierce. The Caribbean athletes are aiming to prove their Olympic victory wasn’t a fluke, while the USA will want to win their sixth successive gold medal in this event at the World Championships.

In Moscow two years ago, The Bahamas were missing their top athletes and didn’t even make the final. This season, their squad is ready for the big battle. The team leader Brown is in sub-45-second shape once again. In fact, on the anchor leg at the IAAF World Relays, when trying to chase down LaShawn Merritt, he split 44.17.

The latest addition to the relay roster, 19-year-old Steven Gardiner, recently clocked a national record of 44.27 at the National Championships, making him the fourth-fastest in the world this season and the fastest on the team.

USA leads the world list this season with 2:58.43 from the IAAF World Relays, where they confidently beat their Bahamian arch-rivals. On paper, the USA looks stronger coming into Beijing, with three team members – Merritt, David Verburg, and Vernon Norwood – in the top 10 in the world this season.

There is no lack of experience in this edition of the USA relay squad either. Except for Norwood, everyone on the roster has won at least one 4x400m major medal.

Belgium – or ‘The Belgian Tornadoes’ as Julien Watrin, Kevin, Jonathan and Dylan Borlee like to be known – are having an outstanding year. They won the European indoor title, setting a continental record of 3:02.87, and then at the IAAF World Relays, they placed third with the national record of 2:59.33.

The Belgians’ strength is in the focus they place on the relay over the individual 400m and in how much time they spend training together under the same coach, learning about each other’s strengths and weaknesses.

Trinidad and Tobago got a boost of confidence before the trip to China, winning the Pan American Games 4x400m title and beating the USA. Even though the Caribbean country sent their best runners to Toronto, namely world junior champion Machel Cedenio and Lalonde Gordon, and the USA only had Kyle Clemons from the top squad, it was still an important moment for Trinidad and Tobago. Their winning time of 2:59.60 makes them the fourth fastest team this season; a time that would have been enough for the silver medal at the 2013 World Championships.

Jamaica and Russia were on the podium two years ago. This year, they are more of underdogs.

The Jamaican squad, led by 20-year-old standout Javon Francis, was recently reinforced by Ricardo Chambers. Chambers had a breakthrough race at the NACAC Championships two weeks ago, clocking 44.83 in the preliminary round, just in time for his late additions to the team. Their team looks capable of running faster than three minutes, which is often enough to get a medal, especially if Francis can repeat his 44-second anchor leg from Moscow.

Russia has not looked strong this year. Their full-strength team finished fourth on home soil at the European Team Championships behind France, Great Britain and Poland.