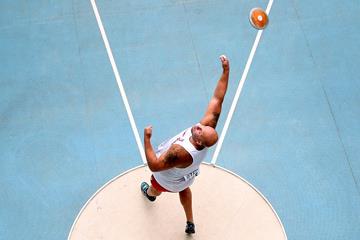 Robert Harting has won the past three world titles, but a new champion will be crowned in Beijing.

The German, who has won gold at all major championships since 2011, tore ligaments in his knee in training last autumn and was unable to regain full fitness in time for the World Championships. With the Rio 2016 Olympic Games in mind, Harting decided to avoid further injury risks and forego his title defence.

But there may still be a Harting on the podium, as Robert’s younger brother Christoph is on the national team. His personal best of 67.53m, set in May, puts him among the top three in the world this year, but an illness and two weeks of an antibiotic treatment has negatively impacted on his mid-season shape.

Harting’s best mark post-recovery is a less spectacular 64.06m, but this was enough to beat a serious rival, Martin Wierig, to the German title.

Poland’s Piotr Malachowski has dominated the global ranks this year. He won four of his six IAAF Diamond League appearances this year. More significantly, Malachowski’s results have significantly improved leading up to Beijing: his three best marks of the year – including his world-leading 68.29m – have come in his three most recent competitions.

Malachowski also entered the 2013 IAAF World Championships as the world leader and kept Harting on his toes throughout the competition, getting closer with every throw. Now the ball is in Malachowski’s court. And the Bird’s Nest is a lucky stadium for him.  Seven years ago he won his first international medal – the Olympic silver – at the venue.

Before Malachowski’s massive throw in August, the world-leading mark belonged to Jamaica’s Jason Morgan, who unleashed a 68.19m effort at a small club meeting in the USA to add a meter to his personal best. But for the rest of the year, Morgan has been closer to 60 metres than 70.

US-based Morgan was left off the team in 2013, despite being the national leader and a medal prospect, as he didn’t have the funds to travel to Jamaica for the trials. In fact, Jamaica didn’t have any athletes in this event in Moscow at all. But on this occasion, Morgan has strong company.

Fedrick Dacres, the 2012 world junior champion, looks ready to make his senior breakthrough. Back in January, Dacres threw 66.30m in Kingston, and more recently he captured his first international title, winning the Pan American Games with a solid 64.80m.

Two other young athletes have made late-season improvements to put themselves into medal contention.

Belgium’s Philip Milanov won the World University Games title last month and followed that up with a 66.66m national record in his last competition before Beijing.

Austria’s 23-year-old Lukas Weisshaidinger, the 2011 European junior champion, increased his personal best from 60.68m to 67.24m over the course of the summer, moving to fifth on the world list. But his next-best throw is more than four metres adrift of that.