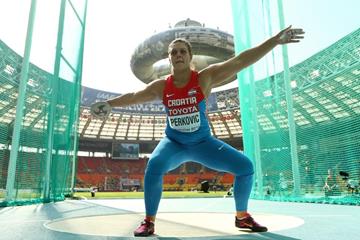 For the past three years, Sandra Perkovic has been the irresistible force in the discus.

Imperious in the throwing circle, the 25-year-old Croatian athlete has also been impervious to defeat. Well, not quite impervious – in three years she has tasted defeat only four times. She lost in Paris in 2012 en route to the Olympic title, in Zagreb in 2013 having already clinched the world title, and – twice last year – in Glasgow before winning the European title and at the IAAF Continental Cup in Marrakech at the end of the season.

So, there are two ways of reading the fact that Perkovic has already lost once – to Denia Caballero of Cuba – this year. One way is that there is hint, just a hint, of an upset brewing in Beijing; the other is that Perkovic has got losing out of the way for 2015 and is heading for a second consecutive world (and third consecutive global) title in the Bird’s Nest.

Last year Perkovic cracked the 70-metre mark – the first time discus thrower to do so in 22 years. This year, though, she has been joined on such rare earth by the woman who looms as the greatest threat to her domination of the event.

Caballero reached 70.65m in Bilbao in June, having first approached the mark with a 69.51m in Havana the previous month. Where Perkovic had been consistently throwing big distances over several years, the 25-year-old Cuban had improved her best from 65.60m in 2012 to 70.65m in just three competitions. She has had nine of her 10 best-ever performances in 2015.

Yaime Perez represents the second of a two-pronged Cuban assault. Perez threw a personal best of 67.13m at the IAAF Diamond League meeting in Lausanne to turn back both Perkovic (67.06m) and Caballero.

Lausanne aside, Caballero holds an edge over her compatriot, most recently at the Pan American Games in Toronto where she took the gold medal ahead of Perez and Gia Lewis-Smallwood of the USA.

Australia’s Dani Samuels, who became the youngest world champion in discus in Berlin in 2009, sits behind Perkovic and the two Cubans on this year’s world list with 66.21m. Though not quite reaching the distances of 2014 – yet – Samuels has again been throwing with great consistency and looms as a strong medal chance in Beijing.

Unsurprisingly for a throwing event, Germany has three competitors – Julia Fischer, Nadine Muller and Shanice Craft – any of whom could find themselves on the podium. Craft was third at last year’s European Championships behind Perkovic and Melina Robert-Michon of France, another of the minor medal chances.

Lewis-Smallwood won her national championship but her best of 64.01m for the year leaves her behind US team-mates Shelbi Vaughan and Whitney Ashley on distance thrown.

But if Perkovic has already had her quota of losses for 2015, they may all be throwing for the silver medal at best.